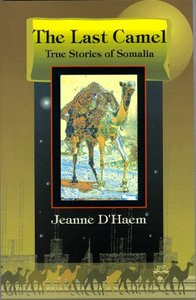 "The stories in The Last Camel deal with fiction, facticity, and the space between the two. never the swashbuckling Peace Corps volunteer, D'Haem's stories teem with compassion, impish curiousity, and downright humility. The stories introduce all sorts of characters, delightful and/or frightening. These are tales of exposure and advocacy woven with care and diligence. The result is a brilliant tapestry corpus on Somali, but opportune." -Professor Ali Jimale Ahmed, author of DAYBREAK IS NEAR and editor of The INVENTION OF SOMALIA

"Most interesting...D'Haem tells [true stories] through the voices of Somali women, some of them excruciatingly honest..." -Publisher's Weekly

The Last Camel is a collection of stories about the people who live in a little village in Northern Somalia. These are compelling tales about African spirits, clever women, untouchable Midgaans, sagacious elders who struggle with modern technology, bandits, and a few goats. The stories are embellished; each one illustrates a special aspect of Somali culture. The tales are told by a young American Peace Corps teacher who lived alone in the village of Arabsiyo in Northern Somalia in the late 60s. The village had no electricity, no telephone, no reliable water supply, and little food. The Somali villagers who were born in Arabsiyo, and the American who came to live among them, struggled mightily to understand each other and the changing world about them. The book reveals the complex hearts and minds of the Somali people because it was written by a young woman who slept among the camels, spoke the language, starved, smiled, and savored life in Africa.

ABOUT THE AUTHOR
JEANNE D'HAEM was a Peace Corps volunteer in Somalia in 1968. She was posted to the village of Arabsiyo in Northern Somalia, where she learned to speak Somali and was adopted by the villagers and made a member of the Sa'ad Musa tribe. D'Haem has a Ph.D. from New York University and is public school administrator in New Jersey. She has traveled extensively throughout the world and writes and lectures frequently about her adventures.