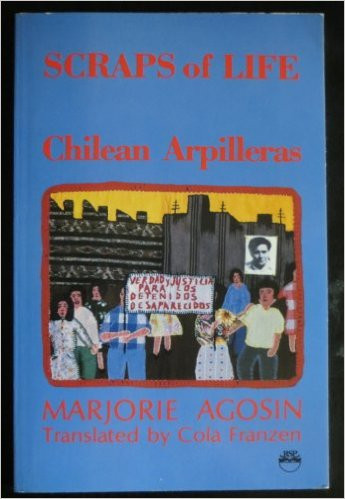 During the years 1980-1985, Marjorie Agosin returned often to her native Chile to visit the Arpillera workshops of the Association of Families of the Detained-Disappeared. Although she acknowledges, "the more I learned about what the military could do, with absolute impunity, the more terrified I became," she decides "not to be afraid of fear" and reaffirms her commitment to tell the stories of the women who make Arpilleras, embroidered and appliqued pictures which tell the true story of what is going on in Chile. These Arpilleristas are searching for any trace of relatives who have been picked up by the authorities and never seen or heard about again. Although most live with small children in crowded hovels with no food, electricity, or running water, these women have banded together to fight back in every way they can. With the help of the Catholic Church's Vicarate of Solidarity - which, despite the fact that these Arpilleras are illegal to sell in Chile, provides the materials, and buys and markets the work to the outside world - the Arpilleristas create art from "scraps of life:" hair clippings, clothing scraps, and pictures and messages about their detained-disappeared loved ones. Scraps of Life brings together a brief history of the rise of Pinochet dictatorship and moving descriptions of Marjorie Agosins' experiences with these revolutionary artists to give us life-saving stories.

Professor Marjorie Agosin has written an honest and moving historical account of the lives and the creativity of the arpilleristas of Chile, those poets of aplique and embroidery, who protest their government's reign of terror, while, at the same time, making remarkably poignant works of art.

Scraps of Life gives an unabashedly poetic and passionate account of the Chilean arpilleras and the movement that produced them.

It has taken great courage for the Chilean women to make their silent protest and just as much courage for Marjorie Agosin to record the story of the arpilleras.

This book is a testimony to what is the worst in human functioning and what is the best in the spirit and soul of humankind.