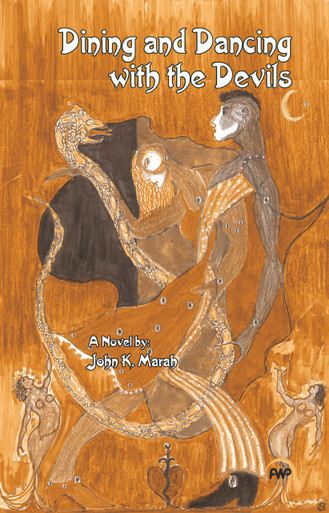 In Dining and Dancing with the Devils, Ben Sesay, the protagonist from the fictional nation of Songhai in Western Africa, is plunged into a turbulent odyssey in the United States that could have ended badly. Without valid immigration papers, Ben had to migrate to Syracuse, to hide for a while, to see which other devils he would have to dine and dance with. In debates with his pan-African friends on African and African-American politics, society, culture, and social-psychology, Ben always put forth his own ideas that seem to be the minority, conservative, unrealistic view point. Yes, they were all from Africa, but Ben was indeed from a different kind of Africa than his homeboys from the better-off classes; from where he stood, he was dining and dancing with the devils in the great American Wilderness.

Ben’s relationship with his African-American girlfriend, Cathy Montgomery, reveals deep-seated historical, cultural and psycho-social complexities that are webs of trials and tribulations in the larger relationships amongst African people; in other words, between Africans and the African Diaspora. Ben’s Dining and Dancing with the Devils takes him into cultural, social, political and mental entanglements with the Western World. In his mind’s debate with itself, Ben walks on a lonely road that he knew he must take, in order to decide and build an African nation that no one will ever mess with again.

To construct that continental Pan-African nation that the other world regions will have to reckon with, Ben Sesay and Cathy Montgomery, Africa and its Diaspora, will have to know that they know themselves individually and collectively, and forgive each other, so that they can craft a nation they can call their own. To accomplish this feat, a few good white men and women will have to make their own, individual, free-willed contributions to the next African nation, an African Middle Kingdom.

Dr. John Karefah Marah’s Dining and Dancing with the Devils is a Pan-African novel that concerns the lived experiences, hopes, wishes, visions and desires of African people, in Africa and abroad; and, in our contemporary global village.
*************************************
Dr. Marah and I collaborated on a literary project a while back and had the chance to interact with him in a setting that made it possible for me to witness the great scope and depth of his intellect, the brilliance of his writing, and excellent work ethic.

I have also followed and read his writings and know that he is one of the leading and prominent US based African academicians whose writings have had a significant impact in providing insights into issues that we all seek to understand and relate to, in ways that make it easy to digest.

Marah is a multidimensional literary genius, an innovative and thoughtful writer, and has already covered the themes in this book in previous works, yet succeeds in powerfully exploring the same themes with a dramatic flair that is as entertaining as it is enlightening. He does it all with a unique blend of realism and humor, fascinating social commentary delivered as a character driven work of fiction.

I feel privileged to be in a position to offer my support and encouragement to Marah in his efforts to continue to write and publish as part of an ongoing mission to educate, inform and create awareness.

This new work of fiction shows he is right up there with the best in both genres.
—Kofi Quaye, Author, Journalist and Publisher, Accra, Ghana and Syracuse, New York

Dr. John Karefah Marah’s Dining and Dancing with the Devils, is an emotional literary work which explores the complicated relationship dynamics between Pan-Africans and peoples of different cultures, historical backgrounds, social classes and economic standings; and examines the impact of the aforementioned on the lived experiences of African people in America and globally, in the past, present and future.
—Debra Joseph-McEwen, Director of the Educational Opportunity Program, SUNY Canton

John K. Marah’s second novel explores the psyche of a fictionalized African university student from the imagined nation of Songhai, named after the ancient West African empire. Ben, the main character, a graduate in fine arts from a New York State institution, is used to reveal complex personal and social issues of the late 1970s, a period often eclipsed by the turbulent sixties. Readers will find that Marah’s narrative offers a whirlwind tour through multiple African and Diasporic terrains, such as the legacy of slavery, colonialism, U.S. racism, Europe’s underdevelopment of Africa, Pan-Africanism and Nkrumah, the fate of independent African nations, African music, interracial sexuality, and, especially, the relationship between Africans and African Americans.

Ben’s involvement with an African American woman is a counterpoint to this novel of ideas. The author uses conversations between Ben and his associates from a variety of African nations, including South Africa, Congo, and Ethiopia, to show competing perspectives, interspersed with leaps of fantasy and poetic verse. The novel is an impressive display of Marah’s encyclopedic grasp and overall scope. He uses fiction to achieve what prominent historians and sociologists have accomplished in their studies of Africa and its Diaspora. This novel can stand alongside other contemporary fictional works that treat the African Diasporic experience, particularly in its exploration of university life and African “immigrant” struggles.
—Joseph McLaren, Professor Emeritus, Hofstra University

JOHN K. MARAH, Professor, is the author of Pan-African Education: The Last Stage of Educational Developments in Africa (1989) and some other books and articles. He is Associate Vice-President for Publications and former President of the New York African Studies Association.