TRANSLATING THE DEVIL: Religion and Modernity Among the Ewe in Ghana, by Birgit Meyer (HARDCOVER) 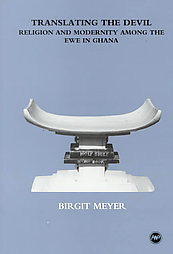 TRANSLATING THE DEVIL: Religion and Modernity Among the Ewe in Ghana, by Birgit Meyer (HARDCOVER)

This book offers an ethnography of the emergence of local Christianity and its relation to changing social, political and economic formations among the Peki Ewe in Ghana. Focusing on the Evangelical Presbyterian Church, which arose from encounters between the Ewe and German Pietist missionaries, the author examines recent conflicts leading to the secession of many pentecostally oriented members, which it places in a historical perspective. The main argument is that, for the Ewe, involvement with modernity goes hand in hand with new enchantment, rather than disenchantment, of the world. At the grassroots level, the study focuses on the image of the Devil, which the missionaries communicated to the Ewe through translation and which currently receives much attention in the Pentecostal churches. It is shown that this image played and still plays a crucial role in the local appropriation of Christianity, since diabolization confirmed the existence of local gods and witchcraft and incorporated them into Christian belief as demons. Comparing the discourses and practices of mission and Pentecostal churches, the study reveals that the latter pay much more attention to Satan - especially through 'deliverance' rituals. Pentecostalism's increasing popularity thus stems from the fact that it ties into historically generated, local misunderstandings of Christianity, which, despite a declared dislike of non-Christian religious practices, stand much closer to Ewe religion than missionary Christianity. With its emphasis on the hybrid image of the Devil and people's obsession with occult forces as a way to mediate the attractions and discontents of modernity, this book sheds light on a hitherto neglected dimension in studies of African Christianity.

ABOUT THE AUTHOR
BIRGIT MEYER is a lecturer at the Research Center of Religion and Society, Amsterdam University.