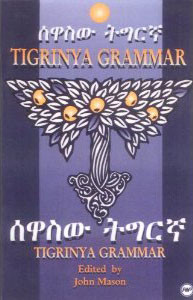 The Tigrinya Grammar is a handbook for everyone who wants to study Tigrinya. Tigrinya is one of the principle languages of Eritrea. Tigrinya is also spoken by over 4 million inhabitants of the neighboring Tigrai region-- as well as some parts of Begemeder and Wollo-- in Ethiopia. Tigrinya and related languages use a special writing system called Ge'ez with important phonetic resources. Tigrinya itself has a tradition of careful and lively expression and is entering a new era of renaissance.

This language handbook was originally developed in 1968 by the Intermission Language Council. It has since undergone numerous changes to the demands of the times.This new edition is both readable and attractive. Its Tigrinya typeface was designed by Phonetic Systems and is the standard typeface of today. A special effort has been made to present the material in an attractive and clear way, with sufficient space for students to make notes between the lines. Example sentences have been reviewed and are given in both Tigrinya and English. The book starts with an introduction to the fidelat (the characters of the Ge'ez alphabet) and presents 200 everyday phrases for beginners. It continues with the calendar, numerals, and telling time, and has chapters on grammar with tables for nouns, pronouns and verbs. All the Tigrinya has been specially proofread more than once. As editor John Mason notes in the introduction, "the Tigrinya language is changing continually, and although the examples and rules here are as far as possible normal, correct usage, this is a descriptive grammar, not a prescriptive one."

ABOUT THE EDITOR
JOHN MASON was born in Caracas, Venezuela. He is a graduate of Princeton University in the field of English language and literature and has done graduate work in languages including Greek, Hebrew, and Arabic, in America, Africa, and the Middle East. He lived in Eritrea from 1974 to 1976 and his interest in Tigrinya dates from that time.