DAYBREAK IS NEAR by Ali Jimale Ahmed (HARDCOVER) 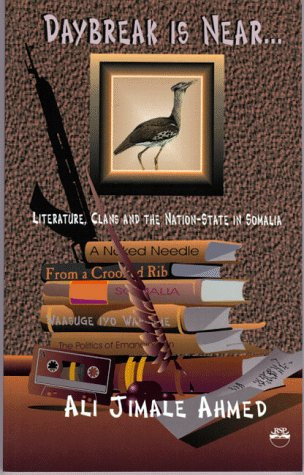 DAYBREAK IS NEAR by Ali Jimale Ahmed (HARDCOVER)

In Daybreak is Near...: Literature, Clans and the Nation-State in Somalia, Ali Jimale Ahmed examines the role literature has played in the modern Somalia society of the past half century. The writer examines Somalia literature, both written and oral, to trace the development of Somalian nationalism, as well as seek explanations for the disintegration of the post-colonial Somalia nation-state. In the tradition of Edward Said, Ali Jamale Ahmed tells us that "the literary text does not only describe existing conceptions of society, but it also captures key events in Somalia history in their inchoate forms. As such, the literary text, as Belinsky states, can be read as the pulse of the nation's inner life.'" Dr. Ahmed demonstrates his perspective with unparalleled mastery and skills by citing numerous evidence from diverse sources such as Somalia prose fiction, Nuruddin Farah's novels, Somalia's theater and Somali poetic duels, touching also on the liberating role of orature and cassette culture in Somali society.

Ali Jimale Ahmed is Associate Professor in the Department of Comparative Literature at Queens College and at the Graduate Center of the City University of New York. He editedThe Invention of Somalia (RSP 1995), co-edited Silence is not Golden (RSP 1995), and has written extensively in numerous scholarly journals. Prof. Ahmed is also president of the Somalia Studies Association of America.
CATEGORIES:
Literary Criticsm, Politics