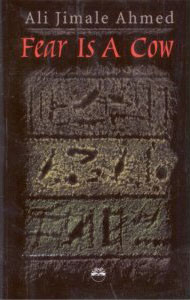 Fear Is A Cow is a collection of poems which focuses on the African "condition" and attempts to come to terms with the continent’s beleaguered past, its present dire situations, and the uncertain future. It is an elegiac book, but one that does not grieve overly and unduly over the ills of the past.  Rather, the collection of poems celebrates the resilience of the human spirit. This is a book that frames and is framed by that age-old Somali adage: “Elegy is the voice of the survivor.”

These are poems that quicken the reader’s senses and the rhythm of his blood, yet forbid him raw recourse to his emotions.

Isaiah Berlin, writing in 1935 of the sense of impending doom enveloping Europe, remarked how poets, “being more sensitive to change, seem to discern so much more accurately than specialists absorbed each in his subject; tell this truth immediately, before it cools.” Alas, the poets were not heeded in 1935.
We do not live in a world where madness and delirium are confined to any one corner or any one people.  Ali Jimale Ahmed’s poems cry to be read, to be heard, to be understood.  In these days when delirium is all about us and in which it is impossible to hide, we must listen.  We must understand.”

“In the poetry of Somalian Ali Jimale Ahmed there is love, pain, and the joy of life. … [R]aised in an African country in which oral communication is still all important, [for Ahmed] poetry [is] an entirely natural form of expression.”

“[Fear Is A Cow] is a passionate and elegant work. It speaks for a multitude.”

Ali Jimale Ahmed is a poet, essayist, and scholar from Somalia. He teaches at Queens College and the Graduate Center of the City University of New York. His most recent book is Daybreak Is Near: Literature, Clans, and the Nation-State in Somalia (Red Sea Press). His poetry and short stories have been translated into several languages.