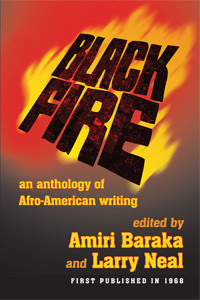 While many texts are readily available chronicling the Black Power Movement, the same cannot be said for its "aesthetic and spiritual sister," the Black Arts Movement. Black Fire: An Anthology of Afro-American Writing is a rare exception that documents and captures the social and cultural turmoil of the period.

Amiri Baraka and Larry Neal, co-editors and contributors to this volume, saw Black Fire as a manifesto to bring about change in Black thought and action, generated from a Black aesthetic. Often considered the seminal work from the Black Arts Movement, Black Fire is a rich anthology and an extraordinary source document, presenting 178 selections of poetry, essays, short stories and plays from cultural critics, literary artists and political leaders. Many of the contributors became prominent, nationally and internationally. Others receded into the cultural landscape, even before Black Fire's first publication in 1968. Included in this groundbreaking volume are the essays of John Henrik Clarke, Kwame Ture (Stokely Charmichael), Harold Cruse and A.B. Spellman; the poetry of Askia Toure, Sonia Sanchez, Gaston Neal, Stanley Crouch, Calvin C. Hernton, and suprisingly Sun Ra; the fiction of Julia Fields and drama from Ed Bullins. Sixty-three additional contributors round out this comprehensive work.