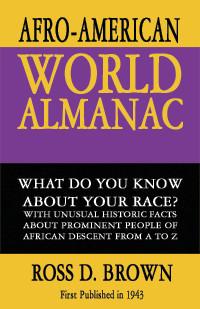 A rare and long out-of-print gem, The Afro-American World Almanac, first published in 1943, is Ross Brown’s effort to document Black achievement. More a notebook than an almanac, this work is a wonderful time capsule to the past, stuffed with hundreds of well-known and little-known tidbits about Blacks. The topics covered in this slim volume are wide ranging. We find information on famous kings and queens of Africa, great Black people in the Holy Bible, and even information on the recently verified Thomas Jefferson/Sally Hemmings relationship. Often, the events captured do not follow a chronological line and the documentation is at times sketchy- but they are fun to ready anyway. Brown has a way of blending the ancient with the modern. He, after all, makes no pretension about being a historian. Brown is a layman, and he compiled this mass of data for other lay people. He wrote and published this book for the “reader on the street,” successfully conveying a sense of passion and urgency that are often boiled out of so called “scholarly” histories.

Published at a time when white publishers exhibited little interest in Black history, The Afro-American World Almanac reminds us of the constant efforts of Blacks to tell their own story in their own words.