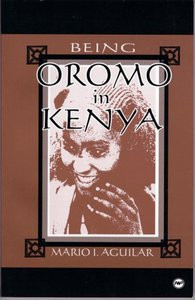 The Oromo are one of the most numerous peoples of Africa, but general recognition of their distinctive culture and identity is comparatively recent. Most of the Oromo live in Ethiopia; however a significant number of them form part of this study, carried out through several years of fieldwork in Kenya, and research into historical archives and sustained collections of oral narratives.

Mario Aguilar explores one of the less researched aspects of cultural, political, and national identity, namely religion and ritual. It is through ritual that the Boornana (Oromo) of Eastern Kenya have remained part of a wider political process affecting the whole Oromo nation. As most scholars have pointed out in the past, the Boorana have converted to Islam and Christianity, and it is with those historical processes in mind that the author explores the role of age groups in social-political transformations, while describing the ritual life of an African community today.

The book constitutes an exhaustive study of the Oromo religion in Kenya, and it develops the concept of a "religious diversification" rather than that of syncretism. The study portrays the dynamics of pastoralism in Kenya as an important phenomenon for our understanding of the modern African nation-states, and the challenge it poses to the centralization of the modern post-colonial state in Kenya.

ABOUT THE AUTHOR
Mario I. Aguilar lectures in Social Anthropology and the study of World Religions at the University of St. Andrews, Scotland. He is the author of Ministry to Social & Religious Outcasts in Africa (Gaba/Kenya; 1995), Dios en Africa: Elements Para una Antropologia de la Religion (EVD /Spain 1997), and a forthcoming volume, Narrative and Interpretations of Ethnic Conflict in Rwanda (Gaba/Kenya). He is also a member of the editorial board of the Journal of Oromo Studies.