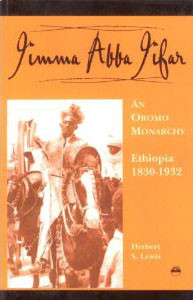 Established around 1830, the Kingdom of Jimma Abba Jifar was the largest and most powerful of the five monarchies formed by the Oromo in the Gibe region of southwestern Ethiopia. Although the Oromo are known for their democratic (“republican”) gada system, Jimma and other Gibe states arose through a series of processes and historical events in the 19th century that propelled certain men into positions of supreme power.  Based on intensive fieldwork in Jimma, this book presents a study of the history and organization of Jimma under its most powerful ruler, Abba Jifar II (1878-1932). Lewis stresses the dynamic aspects of politics and places the politicial history and structure of Jimma in perspective by noting its similarities and differences to monarchial systems in other parts of Africa and the rest of the world. He also explores those distinctive aspects of the Oromo culture which gave Jimma Abba Jifar its particular political style and includes an ethnographic study of an Oromo Muslim agricultural community.