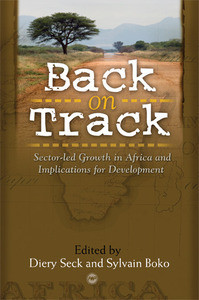 This book is a reflection of the generally-held view that past and current development strategies have not worked for Africa and that new research-based thinking is urgently needed to put the Continent’s long delayed growth back on track.  It provides a thorough theoretical and empirical investigation of the validity of the usually hypothesized dimensions of economic growth.  To this end, the causal relationships between each key sector’s activity and economic growth are analyzed across the chapters by more than twenty researchers whose collective goal is attainment of improved African economic performance and, perhaps, a new development paradigm.

Specific attention is given to trade and the external sector, agriculture, industry, mining, tourism, energy, telecommunications, finance, external debt, fiscal policy and regional integration.  The analysis is also extended to institutional factors in policy formulation and theoretical modeling of very long-term growth.  The insights that emerge from the studies point to the need to reexamine the adequacy of the policies that are currently implemented in Africa and the necessity to establish a regular and intense dialogue between policy and research.

The book is also part of Africa’s current drive to assume responsibility for its actions and their outcomes through conduct of scientific research that is inspired by policy and influences it.  In this sense it aims to enhance the knowledge base for homegrown policymaking and consensus building.  Many ideas in the book will prove to be helpful in Africa’s participation in the global debate and expression of its interests and equally important, defense of the view that if the Continent is peculiar in its development record, it also needs its own specific strategy to achieve its own goals.

DIERY SECK is the Director of the United Nations African Institute for Economic Development and Planning (IDEP), based in Dakar, Senegal. Before this assignment he served as the Executive Director of the Secretariat for Institutional Support for Economic Research in Africa (SISERA) of IDRC, Canada, an Economist at the World Bank and Associate Professor of Finance at the University of Windsor in Canada. He specializes in mathematical economics and his current areas of research are Economic Growth and Africa's External Debt.  Seck has published several articles in scholarly journals and academic books. He is a member of scientific and editorial boards.

SYLVAIN H. BOKO is the Zachary T. Smith Associate Professor of Economics at Wake Forest University.  He was a Fulbright Scholar in Uganda in 2008-2009. He is the author of Decentralization and Reform in Africa, and co-editor of NEPAD and the Future of Economic Policy in Africa, in addition to other publications on economic development in Africa.  He also serves as consultant on regional development projects in Africa.  He is the former President and current Chairman of the Board of Directors of the African Finance and Economic Association.