GROWTH AND DEVELOPMENT IN AFRICA, Edited by Diery Seck and Dipo Busari 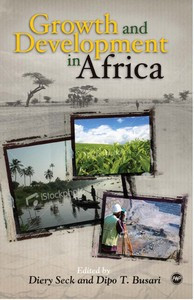 GROWTH AND DEVELOPMENT IN AFRICA, Edited by Diery Seck and Dipo Busari

Africa is a paradox that continues to baffle development scholars. With its largest stock of natural resources in the world, immense unused arable land and water, and a young population, it should have a record of significant economic growth and development, at least comparable to that of other continents.  Yet, it remains the least developed region. Moreover, it keeps losing ground to other regions and now faces increasing marginalization.  It is evident that Africa’s past development strategy has not only been unsuccessful, but also requires new thinking.

As the collective effort of leading African social science research and academic institutions that seek to advance the current debate, this volume includes scholarly studies on diverse and complementary development challenges facing Africa.  It proposes a research-based African perspective on development issues, ranging from sectoral and macroeconomic policy to governance, gender, and globalization.  A variety of approaches, both quantitative and qualitative, are used to investigate the link between economic growth and development, with the intended result of formulating a new development paradigm for the region.

The volume’s scope offers an accurate indication of the understanding of development by African knowledge institutions in the twenty-first century; it also provides a set of cohesive solutions. No doubt, this volume will be of considerable value to public policy managers and analysts as well as to practitioners and scholars.

DIERY SECK is, since March 2002, Director of the United Nations African Institute for Economic Development and Planning (IDEP) in Dakar, Senegal.  Previously he served as Executive Director of the Secretariat for Institutional Support for Economic Research in Africa (SISERA) of Canada’s International Development Research Centre (IDRC).  Before returning to Africa in 1995, he was Associate Professor of Finance at the University of Windsor in Canada, and Economist at the World Bank in Washington D.C.  He specializes in financial economics and economic modelling. Dr. Seck has authored several articles in academic journals and published books on economic development.  He was co-editor of the Journal of African Finance and Economic Development.  He is currently a member of the Editorial Board of Global Governance Journal (University of Warwick), and of the Journal of African Development.  His latest books are entitled Fixing African Economies: Policy Research for Development; NEPAD and Economic Policymaking in Africa; and Sector-Led Economic Growth in Africa.  He serves as an expert for the African Union, African Regional Economic Communities, African governments and the United Nations Economic Commission for Africa on issues of economic policy and sustainable development.

DIPO BUSARI holds a PhD from the University of Ibadan, Nigeria, where he started his teaching career in the department of economics before joining the United Nations African Institute for economic Development and Planning (UNIDEP), Dakar, Senegal, as a lecturer. His area of research interest includes economic growth and macroeconomic stabilization, investment theory and analysis, applied macroeconometric and macroeconomic modeling, and operations research.