THE IMPOSSIBLE RETURN: Struggle of The Ethiopian Jews. The Beta Israel by Abebe Zegeye (HARDCOVER) 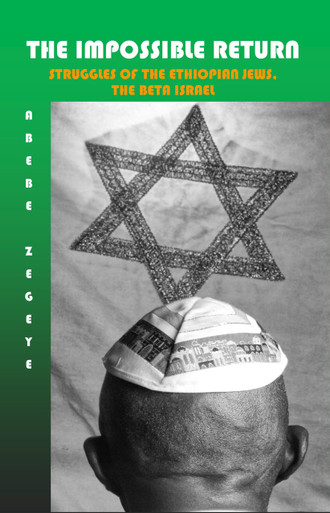 THE IMPOSSIBLE RETURN: Struggle of The Ethiopian Jews. The Beta Israel by Abebe Zegeye (HARDCOVER)

This book tells the story about an African Jewish community known as the Beta Israel that used to live in the northern part of Ethiopia. They were repatriated to Israel in many waves with the aid of the Israeli government and the Jewish Diaspora. The Beta Israel had struggled and faced hardships in order to live out their destiny which was to migrate to the Promised Land. However, their struggle did not stop there. They have had to struggle again to overcome unexpected and new challenges after their long anticipated migration. The book is organized around these two issues.

The early chapters of the book describe the quest for Beta Israel identity within Ethiopia and explore their origins. The discussion on this topic is based on mainly textual analyses of previous works on the Beta Israel. It outlines their history and explores their origins. It examines whether the different types of oppressive Ethiopian regimes have contributed to their decision to leave for the Promised Land. It sketches the socio-economic background of the twentieth-century Aliyah, and briefly analyses the impact of the political upheavals in Ethiopia between 1974 and 1991 when the Derg, the post Haile Selassie military regime, was in power. This sets the scene for the exodus from Ethiopia.

The latter chapters focus on the experience of Beta Israel in Israel. Abebe Zegeye argues that the expectations of Ethiopian Jews in Israel have been thwarted by Israeli officials who consciously put in place structures that have undermined a sense of belonging. The book also examines a single important aspect of difference, offering a case study and a direct critique of the system of education offered the Beta Israel in Israel. The author concludes with an analysis of the cultural and social destabilization within the Beta Israel.

Abebe Zegeye makes the reader rethink the epistemic conditions that created the need for Beta Israel to struggle to migrate to, and achieve recognition in, Israel. He helps to develop an understanding of how the Beta Israel has attempted to adapt to aspects of Israeli culture, and of what remains of their identity in the context of Ethiopia.

ABEBE ZEGEYE has done extensive research on African and social identities. He has taught and worked in Africa, the Middle East, North America, Europe and Australia. He is currently the Director: Global Engagement and Institutional Transformation, Woldia University, North Wollo, Ethiopia.