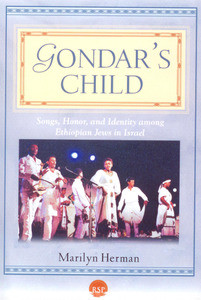 In Ethiopia, Ethiopian Jews were attributed with dishonorable status because of their perceived dissociation from the land. Yet they derived their self-ascribed honor from their link with Israel, expressed through their name: Beta Israel (“House of Israel”).

In the Israeli context, the Beta Israel’s association with Ethiopia constitutes both a limiting factor to their honor, leading to a concern among Beta Israel with the image of their ethnic group, and constitutes also a medium for the pursuit of honor. It is in these terms, and in its concern to progress, that the Beta Israel Band of Porachat Ha Tikva (Blossoming Hope) is viewed as a microcosm of Beta Israel society in Israel. As such, the Band is portrayed as expressive of a shift taking place in Beta Israel identity in Israel in terms of gender and generational relationships, and of the discursiveness between values in tune with their traditional village identity and those they associate with the “decadent” Ethiopian town.

Traditional Ethiopia song-types which form the repertoire of the Band are turned to the Israeli context of the time, amid major international political events, including the first Gulf War. Through the adaption and performance of these songs, honorable values- heroism, patriotism, and honorable expressions of love, are attributed to the Beta Israel, and the Band in particular. Among these songs, those of reminiscence and relating to their migration to Israel provide the focus for various perspectives on this migration, from the fulfillment of Biblical prophecy, to the painful memories of a land of birth and history, where family members were left behind.