CONSTITUTION FOR A NATION OF NATIONS: The Ethiopian Prospect by Fasil Nahum (HARDCOVER) 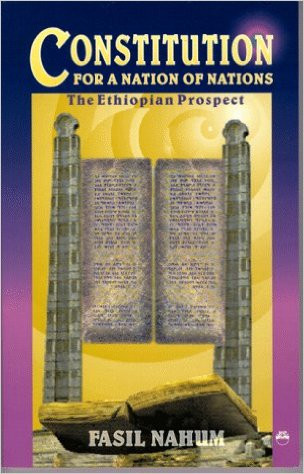 CONSTITUTION FOR A NATION OF NATIONS: The Ethiopian Prospect by Fasil Nahum (HARDCOVER)

Ethiopia is an ancient state with a new constitution and a new beginning. The feudal monarchy that has been its distinctive feature since pre-Christian times has been swept aside. The short flirtation with communism and the civil war it spawned is also over. A new reality has emerged symbolized by, and reflected in, the constitution of 1994. A federal system of government has been installed and a democratic process is unfolding, propelling Ethiopia towards the mainstream of world civilization.

Fasil Nahum is well suited both academically and personally to bring out the first book on the Ethiopian constitution of 1994. The intricacies of federalism and the unfolding of democracy in this ancient land is handled in an interesting scholarly fashion. The book explores Ethiopian history since ancient times from the constitutional perspective and provides startling insights into the traditional unwritten constitution of historical Ethiopia. It is with this background that the present and the future of the third largest nation in Africa is constitutionally examined.

Fasil Nahum has taught law at Addis Ababa University for over a decade, where he served as associate professor and Dean of the Faculty of Law. He is also the founding president of the Ethiopian Civil Service College. He has followed the constitutional ups and downs of his country at close range. At present he serves as Special Advisor to the Prime Minister of Ethiopia.
CATEGORIES:
Law, History, Politics