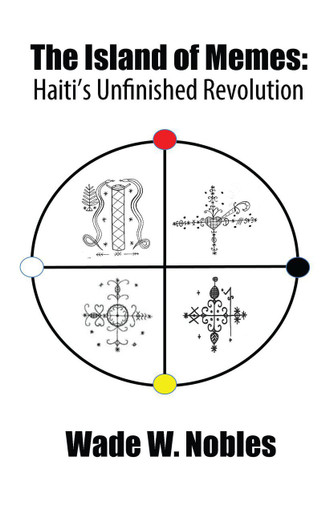 Through the lens of Black psychology, this book is a radical blending of African centered historiography with an innovative analysis of the role of consciousness formation and identity fragmentation as the unfinished revolution. This work provides a new intellectual discourse in the understanding of human psychology, cultural studies, traditional African spirituality, political science, and race relations. The Island of Memes: Haiti’s Unfinished Revolution makes clear that the “remembering” or “re-experiencing” of an African meaning of consciousness is essential to the liberation of the African mind and the development, empowerment, and revitalization of African people worldwide.

This recent book by Dr. Wade W. Nobles, a great psychologist, is of exceptional historical importance, scrutinizing with fresh look the real meaning of Haiti’s revolution led by Toussaint L’Ouverture. This revolution, like every revolution, remains unfinished as Nobles said. However, Haiti’s revolution is in the frame of world history a turning point for all people of African descent on earth. The generations to come will for sure recognize Dr. Nobles’ wonderful achievement. In my view, Dr. Nobles’ work is perhaps the most important book of the last five decades.

Dr. Wade Nobles has made a fundamental and critically needed contribution to a new intellectual discourse that is necessary to understand the past, dissect the present, and project a meaningful future. The Island of Memes: Haiti’s Unfinished Revolution includes a prescription and cure and explains the need for a restoration project not just for the unfinished revolution in the Republic of Haiti, but the unfinished revolutions throughout the African world.

Through this important work, Dr. Nobles carefully introduces and defines concepts and constructs of Western/European caustic memes and African optimal memes resulting in his notion of “shattered consciousness and fractured identity” that exist and continues to perpetuate itself in Haiti and throughout the African world. The Island of Memes will challenge readers and healing professionals to reexamine what it means to be Haitian, African, and human.

In The Island of Memes: Haiti’s Unfinished Revolution, a title which I find terribly appropriate, Dr. Wade Nobles, using the founding architects of Haiti’s liberation, proposes a key to understanding the doorway to freedom while marching vigorously back, carefree and unconscious, into a slave mentality. This book is a must for all who aspire to decide, to guide, to teach, to rule, to care for the well-being, to defend the interest… of a people who suffered multi-secular colonization, slavery, or any such dehumanizing systems.

The Island of Memes: Haiti’s Unfinished Revolution truly is an invitation to begin and not end an important and radically new conversation among African intellectuals and activists alike. It is simply and profoundly a call for the basis of a new conversation for liberation. It is a must read for anyone, especially the African Union, the Congressional Black Caucus, intellectuals, political activists, and nation builders worldwide who want to understand the state of not just the consciousness of African peoples, but of all people who have suffered slavery, colonialism, and the false notion of white supremacy.