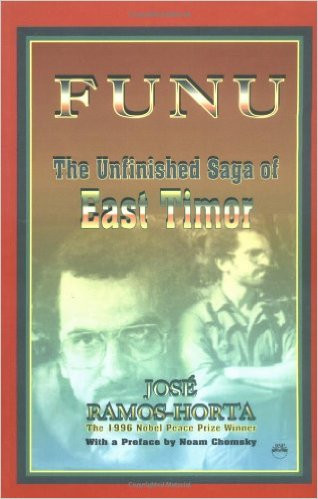 "The pathos of East Timor lies in the fact that in an age of instant communications, in which the victims' grief is seen and heard around the world, argued over by statesmen and kept alive in the public mind which allows hope for redress—its suffering is muted by indifference, remoteness, and underdevelopment...Mr. Ramos-Horta's book presents a modest, more-in-sorrow-than-anger account of his bitter experience of the world's indifference to Indonesia's aggression."

"...the Nobel Committee hopes this award will spur efforts to find a diplomatic solution to the conflict in East Timor based on the people's right to self-determination."

—from the Nobel Committee's announcement of the awarding of the 1996 Nobel Peace Prize to Bishop Carlos Ximenes Belo and José  Ramos-Horta, for their "sustained and self-sacrificing contributions for a small but oppressed people"

The Red Sea Press was proud to publish José Ramos-Horta's Funu [Tetun for "war"]: The Unfinished Saga of East Timor in 1987 and, though the struggle is still unfinished ten years later, we are even more gratified to reissue this account of his life and efforts. We hope that this republication, like the Prize, will refocus international attention on the tiny, subjugated, half-island, so that the long "unfinished saga" soon includes East Timor's hard-won sovereginity.