EAST TIMOR AND THE UNITED NATIONS: The Case for Intervention, by Geoffrey C. Gunn 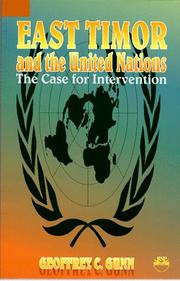 EAST TIMOR AND THE UNITED NATIONS: The Case for Intervention, by Geoffrey C. Gunn

In the forceful tradition of Nobel laureate Jose Ramos-Horta's FUNU (Red Sea Press 1987), the present work advocates self-determination for and the urgent need for UN intervention in the former Portuguese colony of east Timor. Since 1975, when neighboring Indonesia invaded and occupied this small Southeast Asian half-island, an amazingly creative and dedicated international community of activists has arisen over this question. Now, the Nobel Committee's award of the 1996 Peace Prize to Mr. Ramos-Horta and his compatriot, Bishop Carlos Ximenes Belo, is drawing wolr-wide attention to this ongoing tragedy.

In addition to the author's own analysis of the situation, this book features a selection of relevant UN documents and other primary sources relating to East Timor, including: the key General Assembly and Security Council resolutions of 1975-1982; the damning reports of UN special Rapporteurs; the hyper-proceduralist utterances of the Foreign Ministers' meetings; and the World Court "no-case" judgement on the Australian deal with Indonesia over East Timor's oil reserves. This, the most comprehensive collection of official documentation on East Timor published to date, bears eloquent testimony to the silent agony of the East Timorese people over two decades.

ABOUT THE AUTHOR
GEOFFREY C. GUNN is Professor of International relations in the faculty of Economics, Nagasaki University, Japan. A graduate of the Australian university system, he has published a number of works of political history or political sociology on Southeast and West Asia. With Jefferson Lee, he has co-authored works of media analysis on two international questions; Cambodia and east Timor.