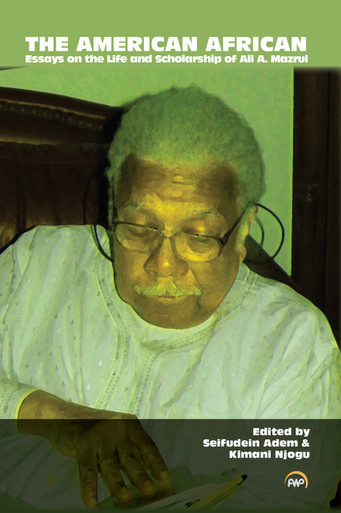 Ali Mazrui once defined an American African as one who is usually first or second generation immigrant from Africa to the Americas, who may be a citizen or permanent resident of countries in the Western hemisphere, whose mother tongue is still an African language, who has immediate blood relatives in Africa, who is likely to be still attached to the food culture of his/her African ancestry and who is still likely to bear African family name, although this is by no means universal, especially among Lusophone Africans, Liberians and Sierra Leoneans. Mazrui’s own definition makes Ali Mazrui the classic example of an American African person, and hence this book, The American African, in which Mazrui’s peers explore his life and scholarship spanning over more than half a century.

The essays assembled in this book present a highly-deserved tribute to the outstanding scholarship of Ali A. Mazrui. During his forty years of a stellar academic career in the United States, Mazrui remained closely attached to Africa, a continent whose triple heritage he helped to champion in all his endeavors. As an African who felt comfortable being both the Albert Schweitzer Professor at SUNY-Binghamton in the U.S. and the Albert Luthuli Professor at the University of Jos in Nigeria, among other distinctions, he promoted global cultural studies as a way of strengthening diversity, human understanding across nations and races, and world peace.

Ali A. Mazrui was a giant among giants, “a man for all seasons”! He was known for his profound intellect, his passionate commitment to the development of Africa and African peoples, his dogged commitment to social justice and his ever present wittiness. Born in East Africa, he became the prototypical American African, a transplant whose feet were planted firmly in both Africa and the US. The authors in this volume who all knew him intimately effectively convey the transformative impacts Ali A. Mazrui had on both worlds.

ABOUT THE EDITORS
SEIFUDEIN ADEM is the former Research Associate Professor and Associate Director of the Institute of Global Cultural Studies at Binghamton University, New York, where he also served as a full-time faculty member from 2006 to 2016. He currently teaches at the Graduate School of Global Studies at Doshisha University, Kyoto, Japan.

KIMANI NJOGU was trained at Kenyatta College, the University of Nairobi and Yale University where he received a Ph. D. in linguistics in 1993. He is an editor, playwright, theorist and linguist.