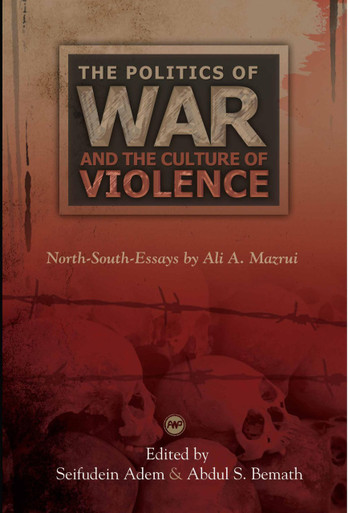 Ali A. Mazrui is arguably the leading African theorist on the role of violence in human affairs. This collection of essays illustrates his range. The spectrum of violence is from military coups and terrorism to nuclear proliferation, from individual assassinations to civil wars. Mazrui has lived in conflict-prone African countries, experienced life under military rule, and personally discussed problems of stability with leaders who have ranged from Nelson Mandela and Muammar Qaddafi to Idi Amin and Robert Mugabe. This volume of essays is a powerful illustration of both Mazruis theoretical insights and his practical experience. No wonder he was the first to coin the term Pax-Africana on the eve of Africas independence half-a-century ago.

Ali A. Mazrui is Director of the Institute of Global Studies at the State University of New York at Binghamton and Senior Scholar in Africana Studies at Cornell University, Ithaca. Mazrui has lectured widely on political Islam in the Middle East, Africa, Europe, North America and the Orient. He has served in leadership positions in such Muslim institutions as the Center for the Study of Islam and Democracy in Washington, D.C., the Oxford Centre for Islamic Studies in England, and at the Center for Muslim-Christian Understanding at Georgetown University, Washington, D.C. Dr. Mazrui has published more than twenty books, hundreds of scholarly articles, and was the author and narrator of the award-winning BBC/PBS television series, The Africans: A Triple Heritage (1986).

ABOUT THE EDITORS
Seifudein Adem earned his PhD in International Political Economy at the University of Tsukuba, Japan in 1999. He is currently Associate Director at the Institute of Global Cultural Studies and Assistant Research Professor, Department of political science, Binghamton University. Dr. Adem is the author of Hegemony and Discourse: New Perspectives on International Relations (2005). He has been widely published in academic journals including African Renaissance and African and Asian Studies while also contributing chapters to various scholarly books over the years.

Abdul Samed Bemath is a South African based Library Consultant and Bibliographer, who was until recently associated with the Financial Times of London. He was awarded Best Bibliography for 2004-2005 by the Association of Southern African Indexers and Bibliographers for his annotated and select thematic bibliography works of Ali A. Mazrui titled: The Mazruiana Collection Revisited which lists 650 entries of Mazruis writings from 1962 to 2003. Bemath is currently a researcher with the South African Financial Mail and is working on a forthcoming supplement on the world renowned African statesman, Nelson Mandela.