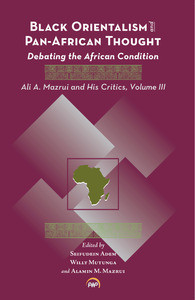 At a Press Conference at the National Press Club in Washington DC Ali A. Mazrui once described his entire professional life as “one long debate.”  In the last half-century he has indeed publicly debated such Heads of State as the late Julius K. Nyerere of Tanzania, Robert Mugabe of Zimbabwe and Milton Obote of Uganda.  Mazrui has also crossed swords with such Nobel Laureates as Wole Soyinka of Nigeria.

This book reproduces some of those debates word-for-word.  The topics of contestation have included defining “Black Orientalism”, evaluating crime and punishment in Islamic Law, the global impact of Pan-Africanism, and the causes and consequences of terrorism.  Mazrui’s radio lectures and television series have reverberated around the world.  They have contributed to his stature among the top one-hundred public intellectuals alive in the world today.

Ali A. Mazrui comes from a Kenyan family of intellectuals who have debated the human condition for generations.  His father was a pamphleteer and social reformer in the Islamic tradition.  This volume on “Black Orientalism” reproduces verbatim some of Ali Mazrui’s own debates in fifty years of postcolonial discourse.  He has published more than thirty books and hundreds of academic articles.  He is widely regarded as among Africa’s greatest political thinkers.  An American university in the 1990s elected him one of “the Icons of the 20th Century.”  He is currently a distinguished professor at the State University of New York at Binghamton, and at Cornell University in Ithaca, New York.

This volume is the third in a series on Ali A. Mazrui and His Critics, also published by Africa World Press.

SEIFUDEIN ADEM is Associate Director of the Institute of Global Cultural Studies at the State University of New York, Binghamton. His publications include Paradigm Lost, Paradigm Regained: The Worldview of Ali A. Mazrui (2002).

WILLY MUTUNGA was recently appointed Chief Justice of Kenya, having been nominated by the President and Prime Minister, and confirmed by the Kenyan Parliament. Prior to this, he had served as the Executive Director of the Human Rights Commission and a Professor of Law at the University of Nairobi, Kenya.  His many publications include The Rights of Arrested and Accused Persons (1990) and Constitution-Making from the Middle: Civil Society and Transition Politics in Kenya, 1992-1997 (1999).

ALAMIN M. MAZRUI is Professor in the Department of African, Middle Eastern and South Asian Languages and Literatures, Rutgers University, New Jersey. His publications include Swahili, Society and the State (1995) and The Power of Babel: Language and Governance in the African Experience (1998), both with Ali A. Mazrui.