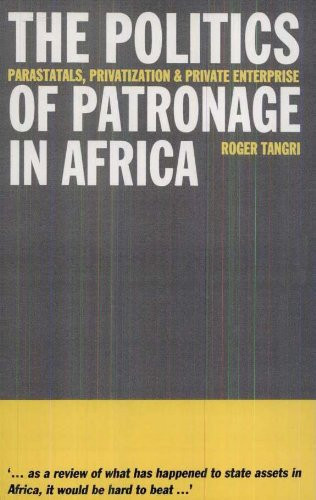 '... as a review of what has happened to state assets in Africa, it would be hard to beat ...' Jeffrey Herbst, Associate Professor of Politics and International Affairs, Princeton University

- The IMF and the World Bank have brought in structural adjustment programmes to reduce the economic role of the state and to create more effective state economic management. But they have been unable to do much about minimizing the significance of patronage politics in running Africa's public institutions.

- International lenders have sought to improve state economic management through the adoption of 'good governance'. Nevertheless patronage politics has persisted within the institutions.

- There has been intense external pressure to privatize state companies. African leaders saw the sales as threats to their patronage. But what happened has often enhanced the political position of those in charge of states. The emergence of crony capitalism has in no way posed a threat to incumbent regimes.

'A teachable general survey of the political factors (especially patronage) on economic performance throughout sub-Saharan Africa with case studies drawn from Ghana, Zambia and Uganda. The book is a masterful comparative survey of the difficulties in developing a private enterprise economy. It is unusual in taking a consistently political approach to explaining the problems of African business, involving antagonistic stances of politicians, the state, international financial institutions and foreign investment ....' Nelson Kasfir, Professor of Government, Dartmouth College