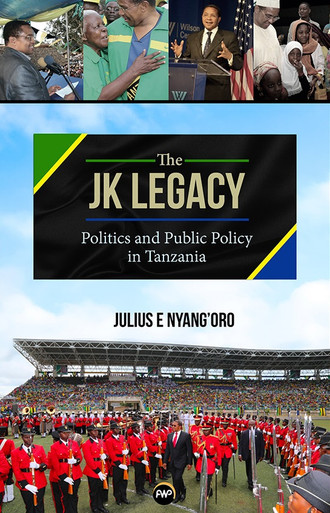 This is the second volume of a comprehensive analysis of the leadership of President Jakaya Mrisho Kikwete of Tanzania by Professor Julius Nyang’oro. In the first volume which was published in 2010, Professor Nyang’oro primarily dealt with the personal and political rise of President Kikwete to the highest office in the land and the circumstances of that rise. In the second volume, the emphasis is on public policy and the legacy that President Kikwete leaves behind after ten years at the helm of power in Tanzania. The analysis presented by Professor Nyang’oro is as objective as one can expect from a scholar who is both critical of some of the policies pursued by the government but also sympathetic to the challenges that any government dealing with issues of underdevelopment must face. It is this balanced approach that characterizes this second volume. The advantage for the reader which this book presents is that it is not simply an examination of President Kikwete and his policies, but rather it is also an analytical summary of the socio-economic and political development of Tanzania since independence presented in a non-jargonistic language.

“Politics and Public Policy in Tanzania: The JK Legacy is the second and final installment of Nyang’oro‘s biography of Tanzania’s fourth president since independence.  The year 2015 marked the end of a ten-year transformative tenure of Jakaya Mrisho Kikwete (JK) as President of this East African country.  The ruling party, Chama Cha Mapinduzi (CCM), under a single party system had been in power for thirty years when a multi-party system was introduced in the early 1990’s. Initially under the new system, CCM was so dominant that it was able to weather the relatively weak opposition that emerged. However, after 2000 the challenge of opposition parties became stronger, and the popular demand for a more democratic country became a part of this whole process. This was the circumstance that faced JK when he was elected in 2005.  He responded vigorously, and by the onset of his second five-year term, JK announced that he would in the following five years lay the groundwork constitutional reforms. Perhaps the most significant aspect of his overall legacy is the dynamic manner in which he was able to follow through on that pledge.  Kikwete proved himself to be a visionary and effective leader. Nyang’oro is able to capture the realities of this legacy in vivid detail addressing how this exceptional leader was able to secure the collective support for these changes from both the masses and the elite. JK represents a model for effective executive leadership and good governance at the highest level.”
—Edmond Keller, UCLA

"JK Legacy is Volume Two of JK’s biography by Professor Julius Nyang’oro. It is one of the very significant contributions to the growing literature on state- and nation-building in Africa. Cast in the analytic framework of political economy, he brilliantly examines the historical and contemporary contexts within which, JK, the forth president of Tanzania, navigated the complex development challenges and policy processes of consolidating the Union of Tanganyika and Zanzibar forming the United Republic of Tanzania, deepening multi-party democracy, presiding over a nascent free-market economy and fully participating in the resolution of various political conflicts on the African continent. On each and every page, Professor Nyang’oro uncovers the dialectical relationship between the role of the individual and the objective forces that impact on regional and national politics, society, and the economy. He carefully and deliberately resists the unscientific claim which tends to believe that history is made by Great Men and Women, Kings and Queens, Statesmen and Politicians. Rather, he brilliantly analyzes the good, the bad and the ugly of the JK’s ten-year leadership legacy by providing a balanced and nuanced account of the complexity of JK, as a person and a statesman, the complexity of the challenges of presiding over a poor and underdeveloped country that is surrounded by fragile and often, volatile regional neighborhoods and immersed in globalized international economic dynamics that casually acknowledges the duty of care beyond borders. Not surprisingly, the book narrative is much more than an interesting story of JK as an individual politician playing politics as he pleases and under self-selected circumstances. It is a very rich and refreshing analysis of the post-colonial political development of Tanzania which has deliberately avoided unnecessary technical presentations and jargons."
—Dr. Severine M. Rugumamu, The Institute of Development Studies, University of Dar es Salaam, Tanzania

"That imprint contains a greater amount of openness in the ruling party and in government; a scaling up of development efforts (including ensuring the maintenance of notable economic growth, massive school and college enrolment and selecting priority areas for immediate implementation); overseeing an inclusive process of the making of a new constitution; endorsing the Zanzibari Opposition’s demand for a shared government; and leading conflict resolution in Africa. This book will be very valuable to those who seek an insight into the personality and vision of President Kikwete, and to scholars in the field of political science, political economy and international relations who wish to enrich their understanding of matters in their fields with particular reference to Tanzania in the 2005-2015 decade."
—Daudi Mukangara, University of Dar Es Salaam

ABOUT THE AUTHOR
JULIUS E. NYANG'ORO is Senior Advisor for Africa at Global Growth Advisors, an international consulting firm with offices in New York, Miami, Beijing, Hong Kong, Montevideo and Teheran. A graduate of the University of Dar es Salaam, he received his Juris Doctor from Duke University, and Ph.D in Political Science from Miami University. He is the author of numerous books including, The State and Capitalist Development in Africa.