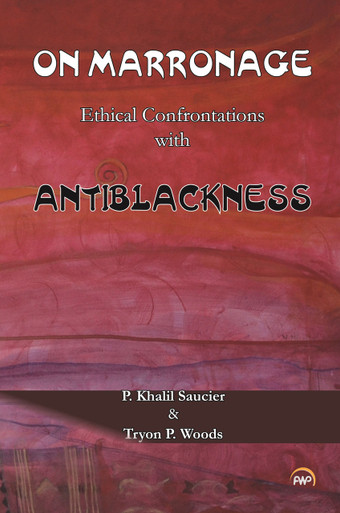 On Marronage: Ethical Confrontations with Antiblackness is a collective intervention into the discursive formation of black studies at the outset of the twenty-first century, the essays in this volume forward a specific confrontation with the existing epistemological violence of the academy and its institutionalization of the study of black people and of racial, sexual, and gender difference more broadly.  Ours is a time of unprecedented black dispossession and criminalization globally, a moment in which contemporary multicultural, post-colonial, and “post-racial” discourse asserts a perverse inversion of racial hierarchy is corrupting the social and democratic cohesion, further muting and transmogrifying the historical struggles for black self-determination into the cellblocks and prison yards of an uninhabitable social incarceration.  We view this situation as proceeding from a signal desire to quarantine the ethical demands of blackness.  The present volume is a response to this state of affairs across the African Diaspora, an ethico-political engagement with the antiblack world—with, namely, the specific context of black bodily subjection that underwrites the production of knowledge about humanity and the social. It offers a new roadmap for negotiating the relationship between dominant conceptual frameworks and black suffering and liberation practice.  In doing so, it sidesteps what too often is a recapitulation of ideas and orientations within Black Studies that effect the myopic closures that have dominated black thought during the past couple decades, and as a consequence, hindered our view of the world, the violent underside and all-sides, the beast and its belly.

On Marronage is both timely and timeless for the set of questions that black struggle has posed, insatiably, across the generations of black radical praxis since the dawn of African enslavement.  As the Westernized and post-colonial global scene continually seeks to contain black liberation, this volume represents and references intellectual and ethical marronage from the world-shaping contours of antiblackness.  In this vein, On Marronage presents itself in the tradition of freedom seekers everywhere and every place.

"This groundbreaking collection from leading Black Studies scholars does the dangerous political work of articulating how violent anti-blackness is foundational in the study of blackness itself. By centering critiques of gender and sexual politics, cultural production, activist intellectualism and creative arts, these essays are deeply instructive on how studies of black suffering must necessarily forge theories and praxes of black liberation."
— Keisha-Khan Y. Perry, author of Black Women against the Land Grab: The Fight for Racial Justice in Brazil

"What happens when Black Studies comes to terms with the Black body as always already the site of nullification, where to be is not to be, where whiteness doesn't simply mark Blackness as difference, but pushes Blackness outside the domain of the relational? And what happens when Black Studies itself is the study of its own absence? These questions require a form of political realism that is unafraid to address the fundamental antagonism at the heart of global whiteness --anti-blackness.  P. Khalil Saucier and Tryon P. Woods have provided us with a text that raises the question of ethics within the structural and ontological context of an anti-Black social world that fails or refuses to recognize how its existence is predicated upon a fundamental negation of Blackness."
—George Yancy, author of Look, a White! Philosophical Essays on Whiteness

P. KHALIL SAUCIER is Associate Professor of Sociology and the Director of Africana Studies at Rhode Island College. He is the author of Necessarily Black: Cape Verdean Youth, Hip-Hop Culture, and a Critique of Identity (Michigan State Press).

TRYON P. WOODS teaches Crime & Justice Studies at the University of Massachusetts, Dartmouth, Africana Studies at Rhode Island College, and Black Studies at Providence College.  His research addresses the sexual violence of antiblackness, both within U.S. politics and legal discourse, and within the leading discourses on globalization and post-colonialism in Africa.