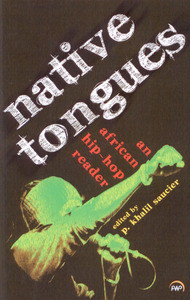 Native Tongues brings together critical and new writings on rap and hip-hop in Africa. It explores the influence of hip-hop on the continent and brings to light the pressing issues that are echoed in the lyrics and images displayed by youth from the townships of South Africa to the streets of Bamako. Readers will learn about hip-hop's ever-expanding reach as an art form and socio-cultural force that shapes youth culture and affects social change by providing African youth with alternative spaces to be creative, voice their opinions, and empower one another. Much of the book centers on issues of cultural imperialism, the integrity of local cultures, corporate culture, local economics, transnationalism, identity formation, and more.

Native Tongues is a central resource for understanding the evolution and influence of one of the most creative and enduring elements of global popular culture. It is a must read for anyone who is at all interested in hip-hop culture and has much to offer students of anthropology, history, cultural studies, sociology, media studies, and black studies.

"Native Tongues brings us the first book on African hip-hop, cross-regionally. This book represents an important and critical contribution to both hip-hop studies and African Studies. Hip-hop studies is now a well-established field, but it lacks significant scholarship on African hip-hop. This book helps to fill in the gap. The book also contributes to African Cultural Studies by thus far being the most comprehensive study of one of the most important cultural movements to sweep across the whole of Africa in modern times." -Msia Kibona Clark, Assistant Professor of Pan-African Studies at California State University, Los Angeles

"Native Tongues reminds the world that Africa is not a country. This diverse anthology draws readers attention to the fact that African hip-hop is rich, multi-layered and incisive in its engagement with post-colonial issues in the age of empire." -Adam Haupt, Author of Stealing Empire: P2P, Intellectual Property, and Hip-hop Subversion

ABOUT THE AUTHOR
P. KHALIL SAUCIER is Director of Africana Studies and Assistant Professor of Sociology at Rhode Island College. he specializes in identity formation, black popular culture, social thought, critical theory, and race and ethnicity. His publications are featured in the Journal of Popular Music Studies, Rethinking Marxism: A Journal of Economics, Culture, and Society, American Communications Journal, Fashion Theory, Encyclopedia of African American Music, and others. He is co-author of the Historical Dictionary of Republic of Cape Verde, 4th Edition with Richard A. Lobban Jr. (2007).