MY GLOBAL JOURNEYS IN SEARCH OF THE AFRICAN PRESENCE, by Runoko Rashidi 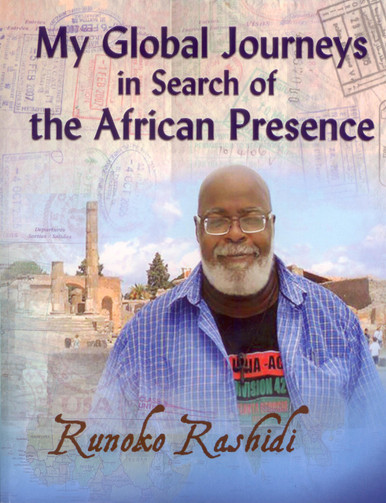 MY GLOBAL JOURNEYS IN SEARCH OF THE AFRICAN PRESENCE, by Runoko Rashidi

As a young man, scholar and historian Runoko Rashidi was inspired by traveling journalist and historian J. A. Rogers. Rogers was undefeatable in rescuing and uncovering Black history from obscure places around the world as well as in unearthing African origins among many of Europe’s historical ruling families. W. E. B. DuBois once wrote of Rogers, “No man alive has written more about the Negro.” In Rogers’ life and work, Rashidi found inspiration and pledged to travel the world much like Rogers had done, following in his footsteps and witnessing firsthand the presence of Africa around world.This book documents Rashidi’s inspired Global Journeys in Search of the African Presence.

This unique travelogue records his country-by-country travels in Africa, Asia, Australia, Europe, Russia, the Pacific and Caribbean Islands, and Central and South America. It also recounts his day-by-day encounters with people, historical markers, art, and cultural practices that both separate and unite Blacks around the world. It’s a richly illustrated text with colorful photos primarily taken by the author.  The photos do a wonderful job of highlighting the author’s pursuit of global Africa. They also present readers with the same stunning visual African presence that Rashidi found and still finds as he continues his travels today. He has visited more than 100 countries, long ago surpassing the 60 that Rogers, his inspiration, visited.

Travelogues as literature are not new as a way of sharing the experience of distant lands. They have been around for centuries. In fact, many of the early exploiters of Africa used their travelogues to inform other exploiters of Africa and the “New World.” The uniqueness of Rashidi’s work is his passionate purpose. He turns the old tradition on its head. Rather than using the narrative to exploit and disperse people of African descent, Rashidi’s purpose is to unite those people, now found all over the world, by pointing to their similarities and unified beginnings. In that sense, the man and the book are unique. No one has traveled further, no one has travelled more, and no one has traveled with this man’s passion of uniting people of African descent with their common origin and history.

Rashidi’s global search continues. Today he regularly takes groups to the many distant places he has traveled and new ones that he crosses off his ever shorter list of places he hasn’t visited. Hopefully, his current activity will lead to a second volume of global searching. With each group he leads, he gets to experience his passion anew, ensuring that a new generation will share the inspiration that propels him.