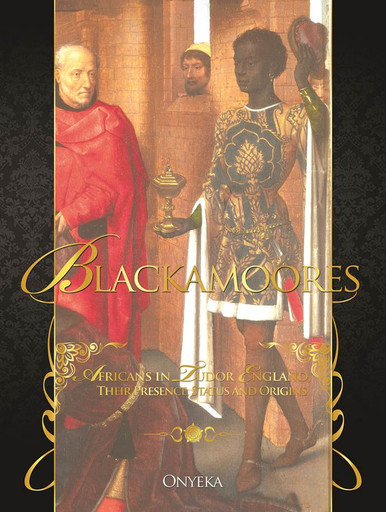 Do we imagine English history as a book with white pages and no black letters in?

We sometimes think of Tudor England in terms of gaudy costumes, the court of Henry VIII and Elizabeth I and perhaps Shakespearian romance. Onyeka's book acknowledges this predilection but challenges our perceptions.

Onyeka's book is about the presence, status and origins of Africans in Tudor England. In it Onyeka argues that these people were present in cities and towns throughout England, but that they did not automatically occupy the lowest positions in Tudor society. This is important because the few modern historians who have written about Africans in Tudor England suggest that they were all slaves, or transient immigrants who were considered as dangerous strangers and the epitome of otherness. However, this book will show that some Africans in England had important occupations in Tudor society, and were employed by powerful people because of the skills they possessed. These people seem to have inherited some of their skills from the multicultural societies that they came from, but that does not mean all of those present in England were born in other countries: some were born in England.

The arguments in this book are supported by evidence from a variety of sources both manuscript and printed, most of which has not been widely discussed - whilst some of it Onyeka has discovered, and this may be the first time that it has been revealed. Other evidence is taken from texts that are the subject of popular discussion by historians, linguists and so on, but Onyeka encourages the reader to re-examine these works in a different way because they reveal information about the presence, status and origins of Africans in Tudor England.

Onyeka is a writer, educator and historian. A lecturer in law, researcher and consultant.