HAULING UP THE MORNING by Izando la Mañana 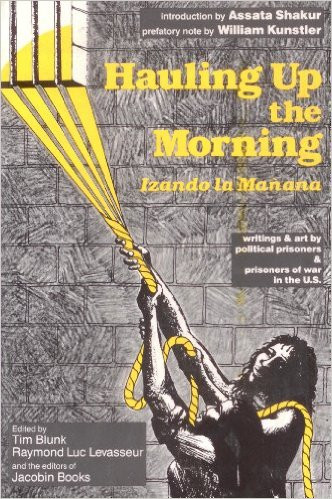 HAULING UP THE MORNING by Izando la Mañana

This book is the answer to a lie.

The lie is that there are no political prisoners in the United States.

The truth, as reflected in these pages, is that U.S. prisons hold almost 200 men and women jailed for their political acts. They are held because of their protests against racism, injustice, and imperialism. They come from almost every national and ethnic group. Some, like the former Black Panthers and Black Liberation Army militants, have been in jail almost as long as South Africa's Nelson Mandela before his release. Some were imprisoned for non-violent protests, some for armed action; some were out-and-out framed. All share a profound commitment to resistance, and a deep belief in humanity. Their poems and stories, article and art works eloquently expose the human truth behind the official lie.

A powerfully moving, thought-provoking testament to the strength of the human spirit and mind. Pride, sincerity, openess, and unshakeable revolutionary will...a vital heritage that must be shared with our people and beyond as an awakening vehicle.

This is an excellent book and it has some fine poetry. It is important to provide creative outlets, especially for those who are restricted; as a former prisoner, I know! The collection of writing in English and Spanish does it magnificently.

While in the occupied West Bank Painting murals with Palestinian artists, I met many mother of political prisoners. They would say, "I am the mother of someone who has been detained, but is not a prisoner in spirit." The work in this book reflects that same reality in the United States. These people are taking a stand and lighting the path for all of us to grow more human.