FACES OF OPPRESSION AND THE PRICE OF JUSTICE: A Women's Journey from Eritrea to Saudi Arabia and then the United States, by Dawit O. Woldu & Irvin Bromall (HARDCOVER) 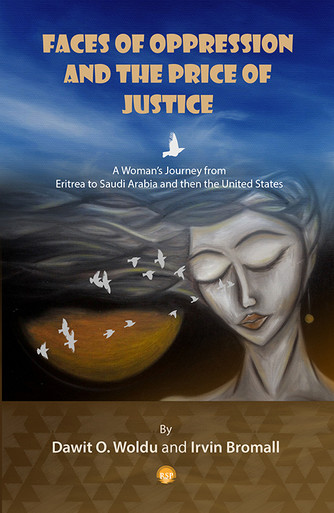 FACES OF OPPRESSION AND THE PRICE OF JUSTICE: A Women's Journey from Eritrea to Saudi Arabia and then the United States, by Dawit O. Woldu & Irvin Bromall (HARDCOVER)

The book is the study of a personal ethnography of an Eritrean asylum seeker named Natsnet (Pseudo name), who experienced different forms of human right abuse in her own country and abroad. The book explores the different social, political, and historical forces that acted in the arduous life journey of this young Eritrean woman from her home country to Saudi-Arabia and finally to the United States.

“This highly original volume reveals the touching story of Natsnet, as she travels the hard road from war-time Eritrea to forced labour in Saudi Arabia, and the mixed blessings of freedom in America. Speaking sometimes in the first person, and sometimes through her interlocutors, Natsnet’s story weaves together her very personal experiences with those of her biographers, but also helps readers to understand the broader historical and political background.  This engaged story-telling reveals the complex emotional burdens that refugees on our shores carry with them. There is no happy ending here, but rather a complex tale, of challenges and hardship, through which Natsnet’s attachment to her family, nation of origin and faith remain resolute”.
—Dr. Sara Rich Dorman, Politics & International Relations, SPS, University of Edinburgh

“Faces of Oppression and the Price of Justice is a compelling account of the protracted experiences of Eritrean refugee, “Natsnet,” a courageous woman who struggled for and eventually achieved political asylum in the United States. This remarkable book tells her life story and follows her protracted journey from the traumas of war and political repression in Eritrea to the gendered and sexual violence accompanying her work as a live-in maid in Saudi Arabia. She eventually ends up in the United States where she spends years navigating the institutional obstacles and cultural biases of the bureaucracy and judicial system of immigration control.
—Faye V. Harrison, Professor of African American Studies & Anthropology at the University of Illinois at Champaign-Urbana

ABOUT THE AUTHORS
DAWIT WOLDU is an assistant Professor of Anthropology and Cross-cultural Studies at the University of Houston - Clear Lake, in Houston Texas. He has published several articles and book chapters on social and ecological determinants of Health, Human Rights, and Migration.

IRVIN H. BROMALL was a former political science Professor at several higher education institutions in the United States. Dr. Bromall also worked as a consultant on community development and civil society for dozens of NGO’s both in the United States and abroad.