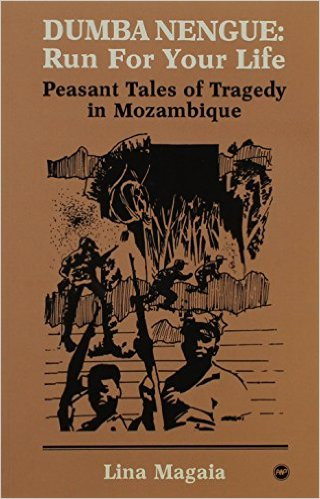 "A powerful and moving firsthand account. Mozambican writer Lina Magaia tells the stories of her neighbors and friends in rural Gaza province, the human targets of apartheid's proxy terror campaign. This book is a unique resource for communicating the lived reality of Mozambique's struggle for survival."
—William Minter, author, King Solomon's Mines Revisited

"Lina Magaia's stories in Dumba Nengue do more than reveal to us the vicious nature of apartheid's contras in Mozambique—the so-called MNR. It lays bare the brutal character of the South African apartheid system and its allies who make possible the MNR. Must reading for all those committed to dismantling the apartheid regime and defending the integrity of the frontline nations."
—Prexy Nesbitt, aide to Chicago's Mayor Harold Washington

"Lina Magaia's book makes grim reading. But it is absolutely essential reading. With moving skill, Magaia's personal account lets us appreciate the harrowing effects of life caused by the South African backed MNR rebels in Mozambique. It is a timely book and it is a must."
—Stephanie Urdang, author, Fighting Two Colonialisms

Lina Magaia is a long time FRELIMO militant and has held a number of positions in the State Agricultural Center. She has written for the weekly magazine TEMPO.