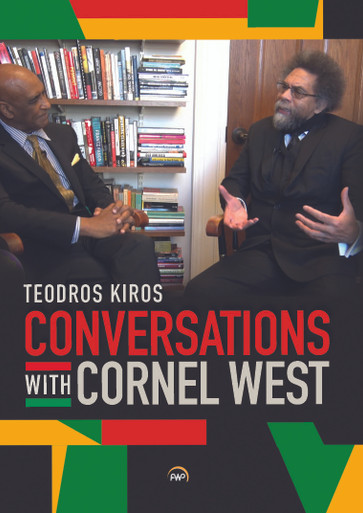 These interviews deftly highlight…the life and thought of Cornel West. Teodros Kiros, one of our leading living philosophers, novelists, television personalities, and commentators on modern African life, brilliantly weaves together a series of dialogues that novices and experts of West’s work alike will find invaluable. The questioning of Kiros and responses of West encourage us to meditate on the meaning of A Love Supreme from the heart, which the Ethiopian thinker Zara Yacob maintained is the site of reason.

Cornel West defines himself as “a bluesman in the life of the mind, and a jazzman in the world of ideas.” Conversations with Cornel West demonstrates the truth of that self-description as he engages in Socratic dialogue with Teodros Kiros, a scholar who not only understands the importance of rigor, but who possesses a fund of knowledge that is broad in scope and analytic in precision. There is no one-upmanship in this shared critical space.

He has written 20 books and has edited 13. He is best known for his classics, Race Matters and Democracy Matters, and for his memoir, Brother West: Living and Loving Out Loud. His most recent book, Black Prophetic Fire, offers an unflinching look at nineteenth and twentieth-century African American leaders and their visionary legacies.

Teodros Kiros is professor of Philosophy and Literature at Berklee College of Music and a Non-resident Dubois Fellow at Harvard University.  He is the host and producer of African Ascent, and author of thirteen books including, Zara Yacob, Ethiopian Philosophy and a novel Cambridge Days.