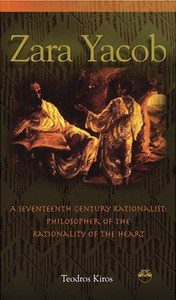 Through a rare autobiographical act, Zara Yacob, who acquainted himself with the teachings of the Catholic Church introduced by Portuguese Jesuit missions in Sixteenth-century Ethiopia, becomes the first self-conscious founder of a philosophical tradition in Ethiopia. Indeed, it is a mild exaggeration to assert that it is Zara Yacob who gave the continent of  Africa an original autobiography, something that was at that time confined to literate traditions outside of Africa. His treatise is a masterful example of self-presentation, clearly and powerfully expressed in a captivating literary style.

“By locating Zara Yacob somewhere between classical Ethiopian philosophy
and Descartes, Teodros Kiros succeeds brilliantly in making very clear the
originality and modernity of this seventeenth century Ethiopian
philosopher. This is indeed a path-breaking achievement that shows us a
different side of African philosophy, particularly its long and complex
connections to the larger field of world philosophy. It is a must read!”

“Challenging the conventions of "reason," "rationality," and our understanding
of the poetics of what it means to feel from the life force of compassion, from
the embodied site of joy and despair, Teodros Kiros offers us, in this poignant
study, the thought of Zara Yacob, one of the greatest East African thinkers of
the early modern era.   The importance of this work for a more global
understanding of "enlightenment" thought and the limits of where religious
thought ends and philosophical thought begins cannot be overestimated.
Whether layperson or professional scholar, this work is a must-read for anyone
interested in the history of African philosophy and the growing scholarship on
the complex relationship of notions of mind to those of body.”

“Teodros Kiros has written an eloquent book about the most important thinker of classical Ethiopian philosophy. This detailed exposition of the thought of Zara Yacob (1599-1692) is at once informative, interpretative and reflective. The work should contribute mightily to the reshaping of the image of African philosophy in our time.”

ABOUT THE AUTHOR
TEODROS KIROS is Professor of Philosophy at Suffolk University in Boston and a writer and journalist. He received his B.A. at University of Wisconsin, as well as a Ph.D. in Political Philosophy, Kent State University. He is author of the books Toward the Construction of a Theory of Political Action; Moral Philosophy and Development: The Human Condition of Africa, The Promise of Multiculturalism, Self Construction and the Formation of Human Values (Winner, 1999 Michael Harrington Book Award for an outstanding book that contributes to human progress.) and Explorations in African Political Thought. Other forthcoming books are a novel titled Cambridge Days and a collection of short stories and essays. He is also a columnist of The Somerville Journal and editor and writer-at-large for The Ethiopian Reporter, an English-speaking newspaper in Addis Ababa.