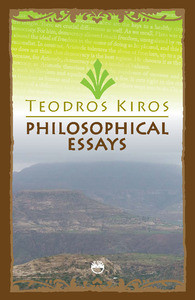 Philosophical Essays seeks to present the idea of democracy systematically beginning with the ancient philosophers and ending with the modern philosopher, John Rawls. Democracy as we have come to know it is associated with the Greek Philosophers, Plato and Aristotle. The accepted view is that the idea of democracy originated with the Greeks and that democracy is exclusively European. Although this is largely true, there is a sense in which it is misleading, which needs to be corrected by further analytic distinctions.

The author proposes that democracy is both a formal idea and a lived idea. As a formal idea, it is true that Plato and Aristotle presented it to the world systematically by writing about it and by subjecting it to a rigorous conceptual analysis; as a lived idea the ancient Egyptians and Asians and following them other African states lived it, as the activity of the people arriving at ideas, deciding matters, taking positions and justifying them through deliberation and participation, two cardinal features of the democracy idea.

The essays in this book were written with the purpose of diffusing the democracy idea to a large audience in a lucid, intelligible and clear language that would appeal to an English reading audience. The essays were first written for an Ethiopian audience, most particularly university students who may not have the means to purchase the classical texts, which fortunately are available to Western students. The typical Ethiopian student is not so fortunate.

In writing to his Ethiopian sisters and brothers with the call to critical reflection on democratic participation and justice through drawing upon their creative resources and reflective judgment, Kiros is engaging in that radical reflective spirit of universalizing praxis. In this sense, in all his homes-in Ethiopian and North American thought-he exemplifies the value of fearless speech, and in so doing, speaks to us all.
—Lewis R. Gordon
Laura H. Carnell Professor of Philosophy, Temple University and author An Introduction to Africana Philosophy and co-author of Of Divine Warning: Reading Disaster in the Modern Age

In Philosophical Essays, Dr. Teodros Kiros once again offers us his elegant analysis and critique of the major philosophers from Plato to John Rawls. By elucidating the philosophical underpinnings of the giant philosophers and systematically dissecting the themes in comparative perspective, the author invites the reader to explore the many facets of philosophical discourses. Whoever reads this book will initially encounter multiple refractions of philosophical essays, but s/he will soon realize that a convenient simplification undergirds the seemingly complex nature of the book. Although the book thoroughly examines the ideas of the philosophers, the dominant framework of thinking manifested in such titles as ‘participatory democracy’ and ‘passion for justice and freedom’ are entirely original. Freedom, creativity, and democracy are central to Philosophical Essays and Teodros Kiros indeed fervently believes that ‘freedom is the most valuable principle of justice’ and based on the Kantian notion of ‘intelligence’, he argues, quite convincingly, that ‘a good constitution can mobilize this intelligence, in service of humanity and produce a good moral condition of citizens.
—Ghelawdewos Araia, Ph.D.
African & African American Studies, Lehman College, City University of New York

ABOUT THE AUTHOR
TEODROS KIROS is a professor of Philosophy/English at Berklee College of Music, a Du Bois Fellow at Harvard University and Executive Producer of the internationally acclaimed, television program, African Ascent. He is the author of eight books, including the award winning Self-Construction and the Formation of Human Values: Truth, Language and Desire, and hundreds of articles. His novel Cambridge Days is forthcoming from The Red Sea Press.