CONSCIENCE ON TRIAL: Why I was Detained, Notes of a Political Prisoner in Kenya by Koigi Wa Wamwere 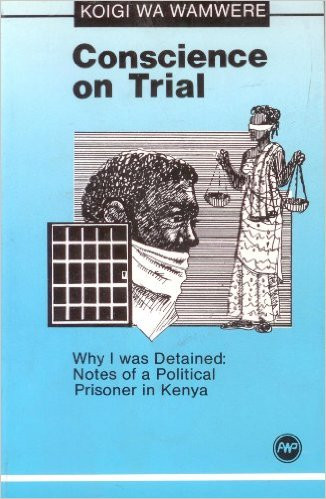 CONSCIENCE ON TRIAL: Why I was Detained, Notes of a Political Prisoner in Kenya by Koigi Wa Wamwere

Conscience on Trial is a harrowing story about the lfate of a Kenyan citizen who rose to the highest political position that its democratic process can provide and yet, faced tremendous persecution at the hands of the state and its security services. His crime was simple enough. He stood up for the rights of the ordinary citizen in Kenya and advocated the democratic ideals that were essential for empowerment and political parrticipation.

The author, Koigi Wa Wamwere, was arrested twice under two post-colonial regimes in Kenya. He was subsequently forced into exile, only after experiencing severe deprivation and persecution while imprisoned. The case of Koigi Wa Wamwere ecemplifies the personal tragedy that is faced by democrats and activists in Africa, and brings to the reader's attention that human rights violations are as urgent and of immediate concern as all other problems facing African states and societies.

Koigi Wa Wamwere was educated at Rugongo Primary School, Nakuru; Mother of Apostles' Seminary, Eldoret; Nyeri High School and Cornell University in the United States. He has been a teacher, journalist, farmer and a member of Kenyan Parliament. For a total of six years, he was twice detained both by Presidents Kenyatta and Moi. He is the author of another book called A Woman Reborn. He now lives in exile in Norway.