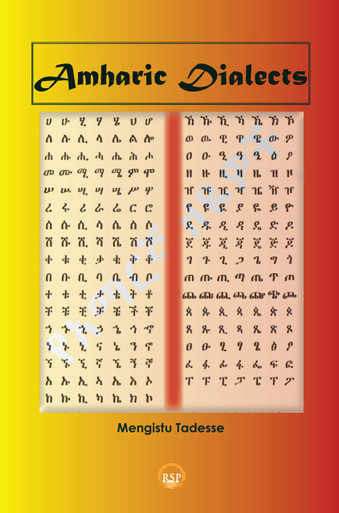 This book describes the phonological, morphological and lexical variation of Amharic dialects by using both natural oral text and elicited data.  In phonetic inventory of Amharic dialects, seventy-six possible consonant segments including three implosives and one velar fricative have been identified from the recorded audio-video corpus. Some of these segments are peculiar to specific areas and some are shared by more dialect areas. The study also shows variations on morphological and lexical levels.

In previous studies, Amharic dialects have been classified into five namely, Gojjam, Gondar, Wollo, North Showa and Addis Ababa. The current study does not support such classification.  Without any geographical barrier or distance, there would be great phonological, morphological and lexical variations. The case of Debark and Dembiya is an example for such incident. For example, substituting /kʼ/ by [tʃʼ], which is discussed as a feature of the whole Gojjam area, does not cover even the whole east Gojjam. Although, it is widely used in Sinan, Degasegnin and part of Bibugn areas, it rarely occurs in Debre Marikos area. Furthermore, it is absent in nearby districts like Debrework, Bichena, Mertolemariam, Mota and Innesesar midir. Areas like Amanuel, Denbecha and Feresbet of Gojjam, Debark and its neighboring areas of Gondar and some areas of south Wollo, despite the geographical barriers and inaccessible distance, mostly speak similar varieties. Similarly, most features that are found in Debark and Dabat areas of North Gondar are not found in other areas of North Gondar such as Koladiba and Alefatakusa. Varieties used in Southern Gondar are mostly similar to those used in north Wollo than those used in north Gondar. Similarly, varieties used in west of South Wollo especially Amhara Saint area are much similar to those used in North Shewa than those used in the areas of eastern South Wollo. Furthermore, except for the people who live in Dembecha and Feresbet, the West Gojjam dialect is similar to the Addis Ababa dialect. Also, the features which are typically known as Gojjam dialect in previous studies are found in Eastern Gojjam. In North Gondar, Debark, Dabat and Wogera have different phonological features from Koladiba, Alafatakusa, Chilga and Armachoho.

Based on the current data, it is reasonable to group South Gondar with North Wollo, South Wollo with North Shewa. North Gondar shall be considered as a separate dialect. The Addis Ababa dialect, i.e. the standard dialect, which may comprise the varieties spoken in various cities throughout the country should be considered as a distinct dialect. East Gojjam and the varieties spoken in Dembecha and Feresbet can be categorized as a single but separate dialect from the others. The latter two are located in West Gojjam. With the exception of those two locations, the variety spoken in West Gojjam is mostly similar to the Addis Ababa one.

Mengistu Tadesse, PhD, has written a number of books and articles and is currently working at the Department of Linguistics, Debre Berhan University.