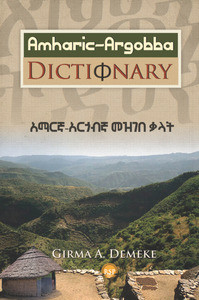 This bilingual dictionary gives Argobba equivalent translations to Amharic entries. It is prepared mostly based on the previously published Argobba-Amharic dictionary by the same author. Argobba has four varieties which can be categorized into two broad dialects. One of the dialects is known as the Shonke-T'ollaha dialect and the other Aliyu Amba - Shoa Robit dialect. The former includes the varieties spoken in Wollo province, especially in villages such as Shonke, T'ollaha and Asyniya. The latter includes all the varieties spoken in areas such as Gacheni and its surroundings, Aliyu Amba and its surroundings, Shoa Robit and its surroundings, etc. In this dictionary the Shonke-T'ollaha dialect is abbreviated as Shonke and the Aliyu Amba- Shoa Robit as Aliyu. All the varieties within the Aliyu Amba- Shoa Robit dialect entered under Aliyu and the Shonke-Tollaha dialect under Shonke.

Argobba is a South Ethio-Semitic language. Its closest relative is Amharic. Once a vibrant language, now it is reduced to being an endangered one with only few thousand speakers. According to the latest national census of Ethiopia ethnic Argobba are 140,134. Unfortunately, the number of Argobba speakers is not mentioned in this report. UNESCO's estimate of Argobba speakers is 8000 (cf. Linguist List). The Linguist List labeled Argobba as extinct as do some other earlier works such as Siebert and Liyew (2001) and Lesalu (1997). UNESCO considers Argobba as a critically endangered language (cf. UNESCO Report). The Argobba Development Association in collaboration with the Argobba community and the present author is currently undertaking a revitalization project. This dictionary is part of the revitalization effort.

Girma A. Demeke is a linguist working mostly on the history and syntax of Ethio-Semitic languages. Dr. Demeke has been engaged also in language development projects and in the documentation and revitalization of endangered languages. He has published eight books, edited more than thirty and wrote numerous articles. In collaboration with the Argobba Development Association, he designed the Argobba Revitalization Project, created the Argobba orthography, and wrote two textbooks and a dictionary. The current dictionary is a continuation of his effort to save Argobba from extinction. Dr. Demeke is currently a research fellow of the Institute of Semitic Studies and the Institute of International Education.