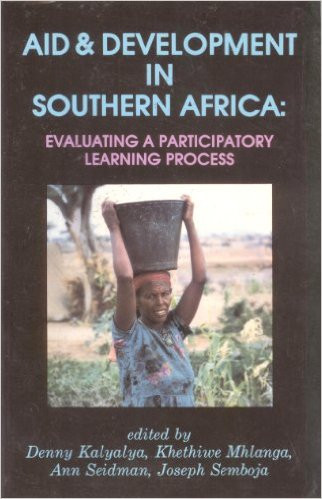 After the first subSaharan African states attained political independence over a quarter of a century ago, many received growing amounts of aid. Today, most find themselves engulfed in mounting crises which have aggravated unemployment and worsened the living standards of the poor. Critics have argued that, instead of helping Africans to achieve greater self-reliance, aid has often increased their dependence and vulnerability to forces over which they excercise no control. They have urged involvement of aid recipients themselves in a participatory process of evaluating aid as an essential means of enhancing their self-reliant efforts to improve their lives.

With signficant implications for donor agencies, Third World research institutions, and development studies programs in the United States and the Third World, Aid & Development ni Southern Africa provides concrete evidence that a particpatory evaluation method ont only provides donors with a useful window on grassroots projects, it also strengthens the project members' and national researchers' capacity to improve the impact of aid in achieving self-reliant development. Drawing on a concrete experience, it provides a guide for introducing and developing an appropriate particpatory methodology. Specifically, it describes a pilot Learning Process in which project members, together with relevant donor intermediary agencies and national researchers, took part in designing a problem-solving method to assess the impact of aid on fourteen grassroots projects in three Southern African countries: Tanzania, Zambia, and Zimbabwe.

Aid & Development in Southern Africa provides concrete evidence that a particpatory methodology not only provides donor agencies with a better insight into the workings of projects they aid, it also strengthens grassroots movements and national capacity to use aid more effectively.