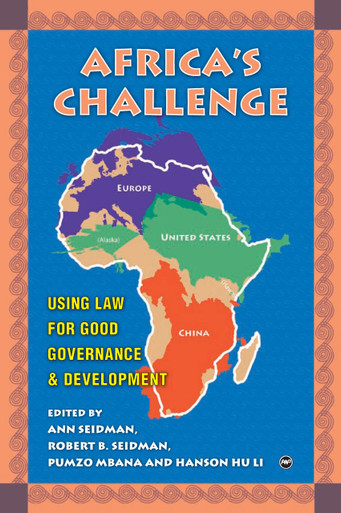 The African continent exceeds in size and natural resources the combined territories of Europe, the United States and China. Yet most Africans must struggle for bare survival. The authors of this books chapters describe different African countries experiences, underscoring the need to use law to transform Africas inherited institutions. Chapter 2 outlines institutionalist legislative theory and methodology as a guide for designing laws to achieve good governance and people-oriented development.

Raymond Atuguba describes how, for almost half a century after independence, Ghanas police force still mainly buttressed elite state power. Atuguba and his colleagues, working through the Legal Resources Centre, eventually hope to propose legislation to promote all Ghanaians welfare.

Teodosio Uates chapter demonstrates how, despite a 1997 law calling for citizen engagement in environmental protection, the inherited drafting system had thwarted the drafters attempts to prescribe clearly and precisely what officials must do to realize popular participation.

Lucian Ngandwe justifies his proposed law to establish a Zambian Commission on Law and National Integrated Development. That Commission would conduct research and design and submit bills, accompanied by reports of the facts logically-organized, to demonstrate, that those bills detailed provisions would facilitate transformation of the inherited institutions that today perpetuate Zambias poverty, vulnerability and poor governance.

ABOUT THE EDITORS
Beginning in 1962, in African universities (and for another year in Chinas Peking University) ANN SEIDMAN and ROBERT B. SEIDMAN conducted research and taught courses relating to law and development. Now at Boston Universitys School of Law, they have served as consultants in projects to strengthen legislative drafting capacity and law-making institutions in some 20 countries, from China to Guyana. Their "Drafting for Democratic Social Change: A Manual for Drafters" (2002) has been translated into Russian, Indonesian, Chinese, Arabic, and other languages. They are Co-Presidents of the International Consortium on Law and Development (ICLAD; www.ICLAD-law.org), which conducts residential and distance courses in drafting for democratic social change.

PUMZO MBANA, a South African lawyer, co-edited this book with the Seidmans as part of his second year project as a Fulbright Scholar in the Brandeis University M.A. Program on Sustainable International Development. Formerly, he had served as a research assistant at the University of the Western Cape and at the Institute for Democracy in South Africa.

HANSON HU LI graduated from Peking University and the Massachusetts Institute of Technology before attending law school at Boston University, where he was a Note Editor of the Public Interest Law Journal. He has also worked briefly as a consultant to the United Nations Children's Fund (UNICEF) and the World Bank Institute (WBI).