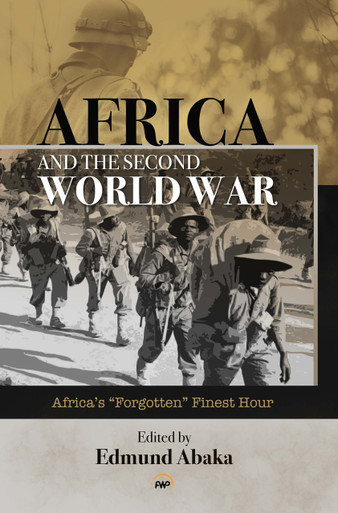 Africans played critical roles in the Allied victory over Nazism and totalitarianism in the Second World War.   However, a palpable silence on Africa’s role in the annual commemorations of the war's momentous events in North America and Europe speaks to a larger phenomenon of lack of recognition.

While there is no shortage of work on the Second World War, the focus is on Europeans, North Americans, and Asians. Except for a few recent monographs, Africa’s contribution to the war remains on the margins of the academic discourse on the subject.

This book moves Africa’s role from the margins to the center of the Second World War discussion. It asserts that the combat role of African soldiers was critical to the Allied victory in the war.  Similarly, Africans’ non-combat role kept military and non-military supply lines open and whirring during the war and facilitated victory. Also of extraordinary importance was Africa’s economic role in the form of voluntary financial contributions, tax revenues, food production, export crop, and mineral production that partly undergirded the war effort. Not least, some African ports facilitated the movement of soldiers and war materials to disparate war theatres.

The papers in this volume speak to these dimensions of Africa’s contribution to the war and more. Why did Africans participate in a mostly European War? What manner of men and women were these colonial subjects who are the unsung heroes of the war?  What exactly did they do, and where?  How did the war affect the lives of the colonial subjects who became pawns in a war between European powers?  One significant unintended outcome of the war was that it accelerated Africa's decolonization process, mobilizing Africans against the restrictive economic policies and broken promises of the colonial powers. The wartime policies increased social discontent and fused with the grievances of a disparate group - workers, trade unionists, farmers, market women, traders, miners, urban dwellers, war veterans and a new class of poor people – to resist a colonial system weakened by the Second World War.

Edmund Abaka is Associate Professor of History at the University of Miami where he teaches African and African Diaspora History courses. He is presently working on two projects partly related to military engagement - the Hausa Diaspora in Ghana and Cuba’s Internationalist missions to Africa.