ACHEBE AND THE POLITICS OF REPRESENTATION: Form Against Itself, From Colonial Conquest and Occupation to Post-Independence Disillusionment, by Ode Ogede, HARDCOVER 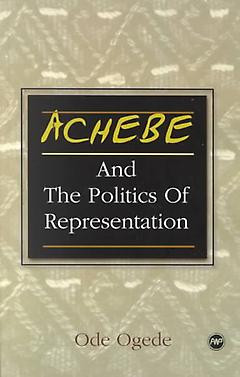 ACHEBE AND THE POLITICS OF REPRESENTATION: Form Against Itself, From Colonial Conquest and Occupation to Post-Independence Disillusionment, by Ode Ogede, HARDCOVER

Cultural nationalism has traditionally been taken as being as plain as day in Achebe's earliest fictional narratives upon which the attention of readers has obsessively been focused. But Ode Ogede calls this powerful view into question.

Ogede introduces readers first to the irony of the fact that in these early works Achebe depended upon satires and tragedy- conventions of narrative borrowed from Europe- for his quest to reverse Western assumptions about Africans. He then re-appraises the connection between aesthetics and ideology in Things Fall Apart, Achebe's most famous first novel, which he examines alongside Achebe's lesser known early works of fiction, concluding that we may no longer continue to take commitment for granted in Achebe's early fiction.

While arguing that it is ironic that the shortcomings of these imitative texts lies in their defining sources of energy, particularly their reliance upon the poetics of Aristotelian tragedy, tracing the evolution of the entire path of Achebe's narrative allows Ogede to champion the enduring quality of Achebe's later works and to urge that readers should get their taste of these neglected texts as well- works about the ideological and aesthetic innovations of which Ogede himself writes with enthusiasm bordering on love.

This is the first book to offer a serious, balanced critical examination of Achebe's fiction. A provocative study of the rich and varied oeuvre of Africa's best known novelist, it redefines the concept of cultural nationalism to encompass issues covering political, social and other forms of behavior that shape and determining the manner in which the writer views himself and his world and it is written in a lively and lucid language that is immensely delightful to read.

ABOUT THE AUTHOR
Ode Ogede, a Nigerian literary critic, teacher, translator, and scholar is currently on the faculty of the English Department at North Carolina Central University. Among his numerous publications are Art, Society and Performance and Ayi Kwei Armah, Radical Iconoclast