MODERNITY AND THE AFRICAN CINEMA: A Study in Colonialist Discourse, Post-coloniality and Modern African Identities, by Femi Okiremuete Shaka 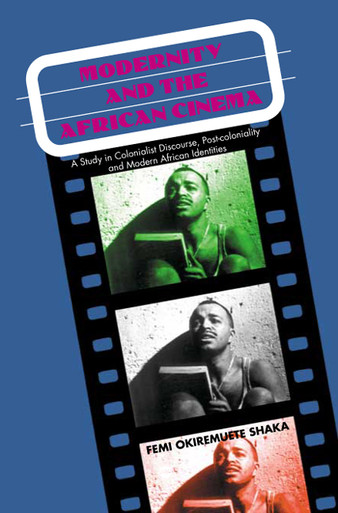 MODERNITY AND THE AFRICAN CINEMA: A Study in Colonialist Discourse, Post-coloniality and Modern African Identities, by Femi Okiremuete Shaka

This book argues that the construction of modern African identity in all spheres of life, including the cinematic institution, is a product of the Euro-African contact that started in the fifteenth century. Traditional African institutions, which were overlaid with European substitutes during the period of colonialism, were transformed by this contact; and although the post-colonial period, especially the earlier years, sought to romanticize traditional African institutions with its politics of cultural re-awakening, a pragmatic marriage of the institutional practices of both continents emerged over the years, resulting in new practices that could be considered hybrid in nature. Many of these new hybrid practices are presented through cinema, one of the modern institutions inherited from colonialism.

This book attempts to define the cinematic institution in Africa and argues that its pluralistic nature, which covers the broad spectrum of the people of the continent, needs to be explained. Furthermore, it argues that modern African subjectivity and social experience as they are manifested in institutional practices, especially that of the cinema, should be put in proper perspective. The author also maintains that these theoretical explanations are crucial since film scholarship involves a tripartite dialogue among film scholars, their aspiring students, and the general reading public.

Providing an archeological analysis of the implications of the Euro-African contact and its effects on cinematic institutions in Africa, this book examines important issues from the perspective of the global politics of subjectivity, agency, and identity construction. Other issues examined include current cinematic theories as they relate to the African context, the nature of colonialist cinematic representations in Africa, and the distinction between the institutional practices of colonialist cinema and colonial instructional cinema.

ABOUT THE AUTHOR
FEMI OKIREMUETE SHAKA studied at the Universities of Benin and Ibadan respectively in Nigeria and took a doctorate degree in film studies at the University of Warwick as a Commonwealth Scholar. He was also Visiting Fulbright African Senior Scholar in the Africana Studies program at New York University. He currently teaches film/TV studies courses at the University of Port Harcourt, Nigeria.