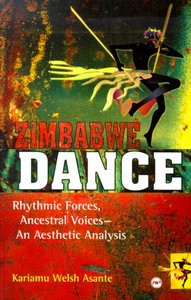 The colonial and post-colonial era robbed African people worldwide of much essential information on traditional African cultures. Now that void is gradually being filled by a new generation of dedicated cultural researchers, with the help of traditionalists and rural folk who have continued their traditional practices in their original contexts. Studies of traditional African dances have opened a uniquely panoramic window into those traditional societies where the dances itself stands as an "aesthetic ledger" that chronicles as well as facilitates the social life of the community. In Zimbabwe Dance, Dr. Welsh Asante's interviews with the keepers of one nation's oral history have yielded a harvest of information on two specific ethnic groups, the Ndebele and the Shona, and their traditional dances, the Muchongoyo and the Jerusarema. Her descriptice analysis of indigenous cultural motifs, myths, and symbols provides us with a "living text" on music, song, and rhythm that radiates-- and replenishes-- the spirit, the values, and the worldview of a distinctive African society.

She examines and celebrates not only the specific ethnicities of the Ndebele and the Shona peoples (i.e., the ethnic diversity of Zimbabwe) but also the survival and endurance of the Zimbabwean national character (i.e., the cultural unity of Zimbabwe). She also highlights the significant role played in modern African civilization by developments in the southern half of the continent, where the former colonial governments had directly affected and inhibited the indigenous cultures via new laws imposing new educational and religious customs on whole societies. The in the new Africa, ironically, such refurbished culture tools as Zimbabwe Dance may well prove to be among the most valuable resources in the the task of nation-building.