WHO IS AFRAID OF THE HOLY GHOST? Pentecostalism and Globalization in Africa and Beyond, Edited by Afe Adogame 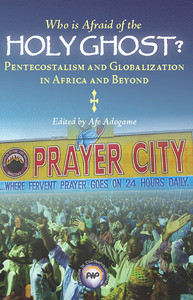 WHO IS AFRAID OF THE HOLY GHOST? Pentecostalism and Globalization in Africa and Beyond, Edited by Afe Adogame

Pentecostal/charismatic movements represent one of the most popular, fastest growing religious movements within contemporary world Christianity. The nascence, expansion of the Pentecostal movement in twentieth and twenty-first century Africa and the African Diaspora leads to a recognition of Pentecostalism as an integral part of the globalization process but also as a product or consequence of it. The fluid, elastic nature of the phenomena, particularly its influence on mainline Christianity render a consideration of a distinctively Pentecostal identity more and more enigmatic. The rhetorical sub-title ‘Who is Afraid of the Holy Ghost?’ best encapsulates the book’s overriding themes and discourses.

The ‘why’ and ‘how’ of Pentecostal expansion and relative success in Africa, the African Diaspora and globally will continue to pose critical issues relevant to historians of religion, social scientists, secular historians, theologians and policy makers in an era of increasing global insecurity and uncertainty. The visibility, mobility and continued growth throws up future challenges to both Pentecostal/charismatic and non-Pentecostals alike, to world Christianity and its interaction with other religions, and within local/global public spheres. Owing to the movement’s public role and strategies of expansion, the pentecostalization and charismatization of world Christianity will be commonplace.

The book provides scholarly, interdisciplinary analysis of these dynamic movements and processes, not just as they impact on Christianity in Africa, but on Christianity generally in its many global contexts. While some contributions undertook conceptual reflection on the appropriation, application of the concepts ‘pentecostalism’, ‘globalization’ and ‘fundamentalism’; others tackled the spontaneous, multifaceted provenance, historical and phenomenal expansion of Pentecostal/Charismatic movements in the geo-ethnic contexts of Nigeria, South Africa and USA. The book also focused on thematic issues such as gospel music; new media technologies (Internet); female religious leadership; deliverance and demonology; religious networking; and revisiting the prosperity theology discourse in African Pentecostalism. These varied perspectives demonstrate how brands of African Pentecostalism challenge, contest and negotiate modernity and globalization, while they at the same time portray Pentecostalism in Africa and the African Diaspora as a form of African modernity. As new Pentecostal/charismatic churches emerge, they will undergo, in the long run, institutionalization and bureaucratization processes likely to transform and change their nature, identity, texture, public (civic) role and modus operandi. In this way, Pentecostalism will continue to reshape and reconfigure the global religious landscape of the twenty-first century and beyond.

The book contributes to the empirical, theoretical and methodological development of African Religious Studies and Pentecostal Studies, and thus fills a significant gap in information, interpretation and analysis of Pentecostalism in Africa, the African Diaspora and their impact on wider global religious scene. The book’s uniqueness lies in the fact that it combines an interdisciplinary approach in investigating the links between different local contexts in Africa and the African Diaspora. The contributions represent some geo-political regions of Sub-Sahara Africa and the contributing scholars are diverse in their racial, ethnic and gender composition. It brings to light a different approach to understanding the dynamic relationship between Pentecostalism and globalization. The book will help readers, scholars, policy makers as well as practitioners, to investigate specific contexts, developments, and issues in diverse historical epochs, thus providing insights for informed reflection, discussion and praxis.

Afe Adogame holds a PhD, History of Religions from Bayreuth University, Germany. He is Assistant Professor in the Religious Studies/Center for the Study of World Christianity, University of Edinburgh where he teaches African Christianities, Indigenous Religions and Religions of the African Diaspora. One of his most recent publications is (co-edited) Religion Crossing Boundaries: Transnational Religious and Social Dynamics in Africa and the New African Diaspora (Brill 2010).