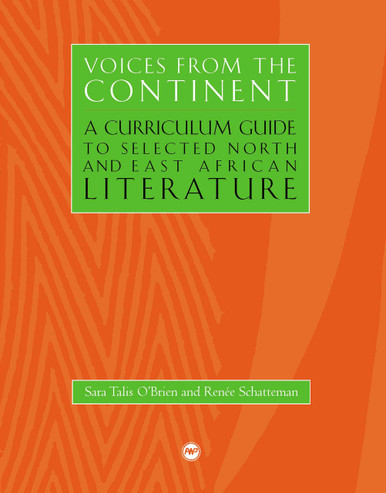 This curriculum guide provides anthropological and historical research as well as literary criticism on five narratives from North and East Africa: A Sister to Scheherazade by Assia Djebar, Fountain and Tomb by Naguib Mahfouz, Woman at Point Zero by Nawal El Saadawi, Song of Lawino and Song of Ocol by Okot p'Bitek, and A Grain of Wheat by Ngugi wa Thiong'o. The background and critical materials are integrated into well-developed lesson plans which include reproducible student handouts, teacher resources, and reading resources.

Voices from the Continent will be a useful tool for college professors and teachers of English and social studies on the high school level who seek to diversify the standard curriculum by introducing students to modern African literature written or translated into English.

The featured literary works are available in the United States and appropriate for use in a variety of courses with students at different reading levels. These literary works introduce a wide range of universal themes while simultaneously presenting the experiences of particular ethnic groups in different regions of North and East Africa.

The lessons contained in this guide may be used in whole or in part, and they may be integrated into larger units on world literature, cultural diversity, psychology, social studies, sociology, and women's studies.

Voices from the Continent: A Curriculum Guide to Selected North and East African Literature is an important and welcome addition to the pedagogical scholarship on Africa. OBrien and Schatteman focus on the significance of characters and major events and provide extensive resources that include step by step suggestions for developing students understanding of the literature. Educators who wish to begin teaching major African authors, and also those who wish to expand their repertoire, should confidently enter the classroom once outfitted with the fine curriculum guide. This work will do much to encourage the teaching of East and North African literature.