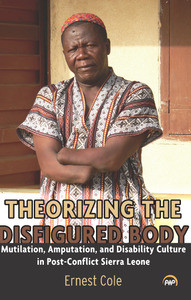 Theorizing the Disfigured Body: Mutilation, Amputation, and Disability Culture in Post-Conflict Sierra Leone explores the mutilated body as signifier of possession, control and domination. It examines the interconnections between the wound or mark on the body and the identity of the individual and affirms that wounding is naming and attests to its power to influence the position of the individual in the world and his destiny. This book uses in addition to war memoirs and journalistic narratives published between 1991 and 2001, personal testimonies of victims published in the annual report of the Truth and Reconciliation Commission in Sierra Leone in 2004 to foreground the author’s argument of the body as signifier.  It explores the branding and amputation of war victims as both a war strategy and construct of the body that signifies possession, identification, and maiming and argues that the amputated or mutilated body is constructed around ambivalence: as text/signifier of domination and control, but also of resistance, rejection and re-invention. The book interrogates, contests, and re-works the notion of dependency and dysfunction associated with the amputated body by re-thinking the mutilated or amputated body as site where the narrative of oppression and marginalization are contested and reversed. It hypothesizes that the amputated body, through agency, informed by irony and paradox, denies, and subverts its stereotypes. It explores possibilities of reclaiming the body and of engaging both physical challenges and psychological trauma. It amplifies the theory of complex embodiment and argues that the amputated body should be ‘read’ both in terms of its impairment as well as its potentials. Through this theory, the disfigured body is neither constructed entirely from its place in the environment. Rather, it acknowledges the social construction while also embracing the physical impairment.

“Deeply theoretical and ethically engaged, Cole's Theorizing the Disfigured Body is an important contribution to the ongoing scholarly conversations about the social construction of the physical self in the context of postcolonial studies.  Based on personal experiences and interviews in the amputee camps of Sierra Leone, as well as narratives, published accounts and official documents of the civil war in his home country, Cole's work complicates the meaning of "amputation" and "trauma" for both perpetrator and the so-called victim of wartime atrocities.”

Ernest Cole is Associate Professor of English and Towsley Research Scholar at Hope College, Michigan, where he teaches Post-Colonial literature with emphasis on Sub-Saharan Anglophone Africa, India and the Caribbean. Previously he taught African literature at Fourah Bay College, University of Sierra Leone (1990-1996), The Gambia College (1996-2000) and the University of The Gambia (2000-2003). He has published articles and book reviews on Post-Colonial literature in the Journal of African Literature Association (JALA) as well as book chapters in A Critical Introduction to Sierra Leonean Literature (AWP, 2008) and African Cultures and Civilizations (Atlantis Books, 2005).