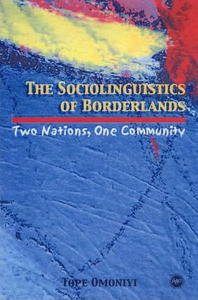 The central pursuit of this book is to demonstrate using the Idiroko/Igolo community on the Nigeria/Benin border the link between language and identity. It raises and discusses issues of identity within a sociolinguistic framework, focusing on the ways in which colonial boundaries affected community, ethnic, and national affiliations and the social and political dynamics of choosing between various identities in these contexts.

In his book, Omoniyi argues that the existence of multiple identities on a border means that its inhabitants are continuously negotiating who they are and how they want to be perceived. How they are perceived by outsiders, he notes, will depend on the interpretation and evaluation of those sociocultural features which set the community apart from others. The resulting variation in language behavior mirrors identity differences between different border communities as well as between the component subgroups at a particular border. Using the analysis of macrosociolinguistic variables, Omoniyi illustrates this claim and engages other fascinating topics.

The book consists of seven chapters and includes some of the following topics: theories and methodologies of African borderlands and identity research, a description of the West African sociolinguistic context, language mixing, language attitudes, multilingualism, and also language choice.

This will be a valuable book for undergraduates, postgraduates, and academics interested in African borderlands, sociolinguistics, and identity issues.

Tope Omoniyi is a senior lecturer in the Department of English at the University of Surrey, Roehampton. He has published several journal articles and contributed book chapters on language, ethnicity and identity as well as edited Islands and Identity in Sociolinguistics: Hong Kong, Singapore and Taiwan as a special volume of the International Journal of the Sociology of Language Volume 143.