THE NEGRITUDE MOMENT: Explorations in Francophone African and Caribbean Literature and Thought, by F. Abiola Irele 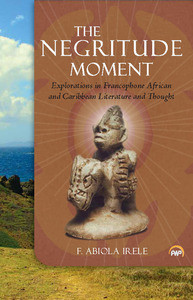 THE NEGRITUDE MOMENT: Explorations in Francophone African and Caribbean Literature and Thought, by F. Abiola Irele

In this collection of essays, which span more than forty years of sustained scholarship, Irele explores the varied aspects of Negritude as a movement and as concept. He provides an account of its historical origins and examines the sociological and ideological background of the themes that have preoccupied French-speaking black writers and intellectuals in their confrontation with the pressures of a difficult collective experience, in both its objective manifestations and its inward implications. The collection includes a rare essay on the structure of Aimé Césaire’s imagery in its poetic transmutation of this experience. Throughout the collection, distinguished by the clarity of his language, Irele pays attention to the debates Negritude has generated over the years and stresses the centrality of these debates to the emergence of a modern consciousness in the black world.

“F. Abiola Irele’s The Négritude Moment: Explorations in Francophone African and Caribbean Literature and Thought brings together almost fifty years of scholarship on Négritude by a foundational figure in Francophone African and Caribbean studies in the United States. Irele’s pathbreaking essays take the reader on an enthralling intellectual journey into one of the most influential cultural and political movements of the twentieth-century, offering the kind of rigorous analysis and historical contextualization that are often lacking in discussions of the subject. The sustained engagement with the philosophical, poetic, political, and sociological writings of Aimé Césaire and Léopold Sédar Senghor serves to highlight their extraordinary impact, the tentacular networks of influence they fostered, and their unique contributions to expanding our understanding of colonialism and race. Irele’s essays skillfully navigate this challenging terrain, pointing to complex theoretical questions, while revealing how Négritude in its various incarnations remains pertinent to all kinds of interdisciplinary inquiries and contemporary investigations into questions of ethnicity, diaspora, and global Black consciousness.”
—Dominic Thomas, Professor of French and Francophone Studies at the University of California, Los Angeles, author of Black France: Colonialism, Immigration, and Transnationalism (Indiana University Press, 2007).

"This pioneering and far-reaching collection of Prof. Irele's essays could not be more pertinent, as négritude is again being reassessed in the light of new scholarship."
—Ronnie Scharfman, Prof. Emerita of French and Francophone Literature, Purchase College – SUNY

ABOUT THE AUTHOR
F. ABIOLA IRELE  is currently Provost of the College of Humanities, Kwara State University, Malete, Nigeria. He was formerly Professor of French and Head, Department of Modern Languages, University of Ibadan. He has taught at various universities in Africa and the USA, including the University of Ghana, the Ohio State University, Tulane University and Harvard. He has also held a visiting fellowship at Churchill College, University of Cambridge. His publications include The Cambridge History of African and Caribbean Literature (edited with Simon Gikandi) published in 2004, and three collections of essays: The African Experience in Literature and Ideology (1981, rpt 1990) The African Imagination: Literature in Africa and the Black Diaspora (2001) and Négritude et Condition Africaine (2008).