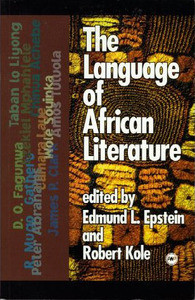 African Literature written in English is not only a literature of great variety and power - it is also a literature of world importance, entitled to the most detailed and advanced linguistic and stylistic analysis. The essays gathered together in this book meet the demand by scrutinizing the language structures and narrative conventions used by some of the most prominent authors on the continent including Camara Laye (Guinea), Wole Soyinka (Nigeria), R. Mugo Gatheru (kenya), Ezekiel Mphalele and Peter Abrahams (South Africa), Chinua Achebe, James P. Clark, D.O. Fagunwa, and Amos Tutuola (West Africa); and Okot P'Bitek and Taban lo Liyong (East Africa). In this unprecedented anthology, some of the most prolific and widely-read African novelists are analyzed - by some of the most advanced African linguists - from two divergent but mutually illuminating perspectives: a sophisticated linguistic and cultural analysis of their works as world-class literary products; and a "cross-cultural " analysis of the rich influence of one (or more) of the over 3,000 indigenous African languages on the English-language writing style of these African authors. This collection of articles, all of which were originally published in "Language and Style: An International Journal", is a major contribution to the study of "anglophone" African literature.

ABOUT THE AUTHOR
EDMUND L. EPSTEIN is professor of English at Queens College and Graduate Center - City University of New York. He is the author of several books on linguistics and on modern literature, among them "Language and Style" and "Linguistics and English Prosody" (with T.F. Hawkes), and has been editor of "Language and Style: An International Journal" for almost thirty years.

ROBERT KOLE is an instructor of English at Queens College/City University of New York and a Ph.D. candidate in English at the City University of New York Graduate School. He is a Shakespearean scholar who specializes in textual issues as they relate to the staging of plays. A frequent contributor of theater reviews to "Shakespeare Bulletin", he has been assistant editor of "Language and Style: An International" journal for eight years.