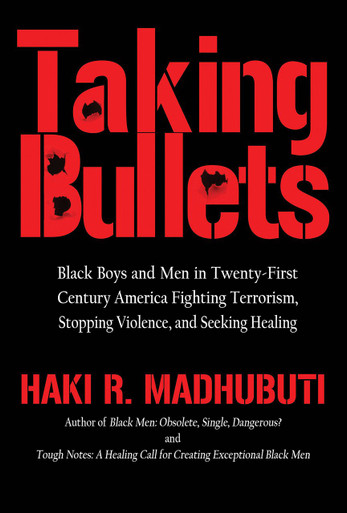 Taking Bullets: Black Boys and Men in Twenty-First Century America Fighting Terrorism, Stopping Violence, and Seeking Healing starts a national debate on Black male empowerment with an urgency for the survival of a generation of Black men and boys who are confronted with disparity and adversity on the streets of every city in America. Haki Madhubuti speaks directly to these young men with an empathic understanding of their plight, yet he sees hope and a vision for their future. In Taking Bullets, he challenges community leaders, educators, and all of those individuals who directly impact the lives of our young men to develop sustained strategies to confront and challenge the systematic problems of police violence, mass incarceration and economic disparity.

Haki R. Madhubuti―poet, publisher, and educator―has published over thirty books including YellowBlack: The First Twenty-One Years of a Poet’s Life; Liberation Narratives: New and Collected Poems 1967-2009; Honoring Genius, Gwendolyn Brooks: The Narrative of Craft, Art, Kindness and Justice; and the best-selling Black Men: Obsolete, Single, Dangerous? The African American Family in Transition. He founded Third World Press in 1967. He is a founder of the Institute of Positive Education/New Concept School, and a cofounder of Betty Shabazz International Charter School, Barbara A. Sizemore Middle School, and DuSable Leadership Academy, all of which are in Chicago. Among his many honors and awards, Madhubuti received the Barnes & Noble Writers for Writers Award presented by Poets & Writers Magazine and was awarded the Ninth Annual Hurston/Wright Legacy prize in poetry for his book, Liberation Narratives. Madhubuti retired in 2011 after a distinguished teaching career that included Chicago State University and DePaul University where he served as the Ida B. Wells-Barnett University Professor.